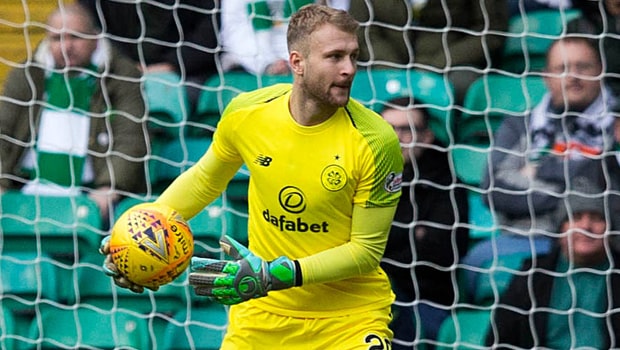 Celtic goalkeeper Scott Bain isn’t worried about any potential hangover from the international break catching the champions out when they face Rangers on Sunday.

The Hoops welcome their Glasgow neighbours across the city, knowing victory at Parkhead would put them on the brink of securing their eighth successive Scottish Premiership title.

Neil Lennon’s side are already 10 points clear of Rangers, but the Light Blues ended a long run of pain in the derby fixture when they won at Ibrox in December.

Bain, who was part of a Scotland squad that travelled to Kazakhstan and then faced San Marino away during the international break, says he’ll be well rested before Sunday’s midday showdown.

“Obviously Sunday is going to be a massive game for us,” he said. “It will be a great atmosphere.

“We’ll prepare well and look forward to it. I’ve had a couple of days’ rest before we go back to Lennoxtown. We’ve been looked after well while we’ve been away – top class planes, hotels and food. Now it’s simply a case of resting and going again.”

Bain feels the new ticketing arrangements will help Celtic’s cause come Sunday lunchtime, though he admits some of the electric atmosphere associated with Glasgow on derby day has been diluted.

Rangers announced last May that they would be slashing Celtic’s allocation of briefs for matches at Ibrox by over 6,000 to just 800, leading to the Bhoys reluctantly reducing the size of the away support in a reciprocal move.

Bain would prefer to return to the traditional allocations. “There will be a lot more Celtic fans than the last time we played them,” he said.

“There will be less Rangers fans and we need to use the atmosphere. If anything, I like it when there are more away fans.

It creates a better atmosphere, more of an Old Firm derby feeling. But it is what it is.” Celtic are 1.73 to win on Sunday, with Rangers 4.33 to make it back-to-back wins and the draw priced at 3.75.