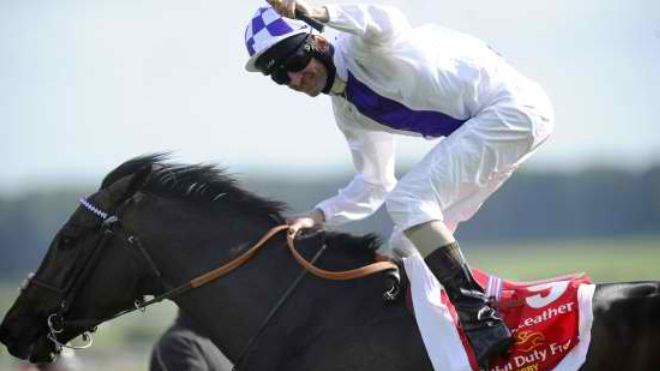 Trainer Jim Bolger hopes Trading Leather has four more big runs left in him this season as he outlines an ambitious plan for Irish Derby winner.

The County Kilkenny trainer is having a good Flat season so far, with Dawn Approach winning the 2,000 Guineas and St James’s Palace Stakes, while Fionnuar has also been in good form.

Bolger’s other star turn has been Trading Leather, who has won on her last two starts at the Curragh, while the three-year-old also finished second in the Dante Stakes at York in May.

The master of Coolcullen has been delighted with Trading Leather’s form this season, the colt building on his growing reputation which was established by winning the Autumn Stakes at Newmarket last October.

Bolger is now eager to test him against some of his older rivals and hopes to see him run in the King George VI and Queen Elizabeth Stakes at Ascot on July 27.

Trading Leather’s first appearance at the Berkshire course could then be followed by a run in the Juddmonte International at York on August 21, while Bolger is also looking for him to compete in the Irish Champion Stakes Qipco Champion Stakes on Champions Day.

“He’s very well, is back to his racing weight very quickly and he’s in very good form,” Bolger told At The Races.

“The plan all along was to run in the Irish Derby, then the King George and then we’d have a look at the Juddmonte (International) and the two Champion Stakes.”

A run out in the King George VI and Queen Elizabeth Stakes later this month could see Trading Leather go head-to-head with St Nicholas Abbey, who impressively won the same race last year.