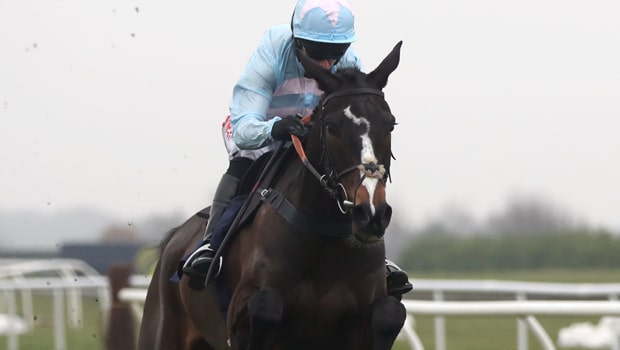 Tom George is hoping Black Op will be starting out on the road to Cheltenham when he has his first outing over fences at Exeter on Wednesday.

The seven-year-old is a former point-to-point winner and will be fancied by many to excel in the novice chasing division this season.

After winning a Doncaster maiden hurdle in January, Black Op finished second to Grade One-winning pair Santini and Samcro in two visits to Cheltenham, latterly in the Ballymore Novices’ Hurdle at the Festival in March.

That was identified as an excellent run at the time given Samcro’s profile and Black Op duly enhanced the theory when running out a gutsy winner of the Mersey Novices’ Hurdle at Aintree on his final start over timber.

His best would always have been deemed likely to come once he went chasing and George is looking forward to the new term, which begins in the RGB Building Supplies Beginners’ Chase (15:10) at Exeter on Wednesday. “He is great and is ready to go.

He schooled on grass on Monday, and Noel Fehily came in to ride him, and he jumped well,” he said.

“There is a long winter ahead of us, but it is a good place to start off.

He has had a clean run since he has come in. “He is the same as he always was in that he is a very laid-back horse, but he wakes up at the races when he needs to.

“Two and a half is probably his ideal trip, but this is a good starting point. It is a good track to start them on, and we will see where we are with him after that.”

Black Op is 1.40 to make a winning return at Exeter while he is currently 9.00 favourite to win the JLT Novices’ Chase at the Cheltenham Festival in March.