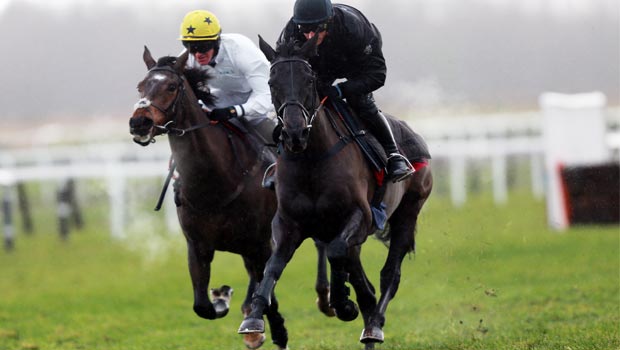 The 10-year-old has not raced competitively since recording an easy win in Newbury’s Long Distance Hurdle over 12 months ago, but looked well under a testing ride from Daryl Jacob.

The popular son of Cadoudal was found to be suffering from a leg injury after that facile victory, but will now be aimed at Cheltenham’s Cleeve Hurdle next month.

Trainer Paul Nicholls has pencilled in the race as a likely starting point as connections bid for a fifth Festival victory next March.

Nicholls said: “Our plan was to go for the Cleeve Hurdle ahead of the World Hurdle and then possibly taking in Aintree in the spring.

“To be quite honest he looks as good as new, and when you consider the likes of Tidal Bay and Kauto Star he is still a young horse and there is no reason he won’t be as good as he’s ever been.

“With any horse who has had the problems he’s had, you take it day by day. It was the same injury that Al Ferof sustained and he has come back at the top level. He’s done loads of steady work on the walker and is a horse that wants to be ready to run.

“It’s amazing, but he hardly ever blows afterwards. He was going to come back at the top level or not at all, and I am really delighted with him.”

Nicholls confirmed that Big Buck’s will face one more racecourse gallop, either back at Exeter or Wincanton, before the Cleeve.

The gelding’s closest market rival for the World Hurdle is generally considered to be At Fishers Cross, but he suffered a recent mishap in this year’s renewal of Newbury’s Long Distance Hurdle last month.

He finished fourth of five to Celestial Halo after stumbling badly jumping the second-last and will attempt to gain revenge on that rival in Saturday’s Long Walk Hurdle at Ascot for which six horses have been declared.