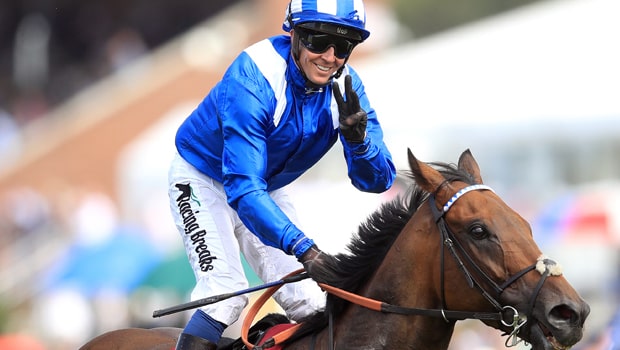 Charlie Hills is taking every precaution as his stable star Battaash bids to make it third time luck in the Coolmore Nunthorpe Stake at York.

The speedster has twice finished fourth in the Group One sprint, seemingly failing to bring his A-game to the Knavesmire contest. Yet again this season he has warmed up with an impressive success in the King George at Glorious Goodwood, becoming the first evert three-time winner of that contest.

His only defeat of the term came in the King’s Stand at Royal Ascot behind the imperious Blue Point in June. With Battaash being a creature of habit, Hills has made some alterations to his raceday schedule for this third tilt at Nunthorpe glory. He also said the five-year-old was deliberately given an easy time at Goodwood.

“We’ll take him up in the morning rather than the night before,” the Lambourn-based Hills said. “He likes his routine, so it’s got to be a plus if he stays in his own stable the night before, while we’ll box him across to the course before the race.

“The last two years he’s looked mightily impressive at Goodwood, but we didn’t really want to give him a smack this year. He still recorded a fast time, but we didn’t want to ask him for a massive effort.” July Cup winner Ten Sovereigns represents Aidan O’Brien while last year’s runner-up Mabs Cross is also a huge player for trainer Michael Dods in the Nunthorpe. Hills is optimistic that Battaash can run his best race to date in the York feature.

“He’s drawn on the other side from where he’s been the last two years, which could be a good thing,” he added. “It’s an intriguing race – one I’m looking forward to – and it’s a Group One, which means nothing is easy.

“That said, I don’t think I could be more pleased with him. He looks fantastic. He’s been there twice before and knows what he’s coming for, but it’d just be nice for him to get his head in front at York.”