Horse Racing: Ballyalton being teed up for Cheltenham 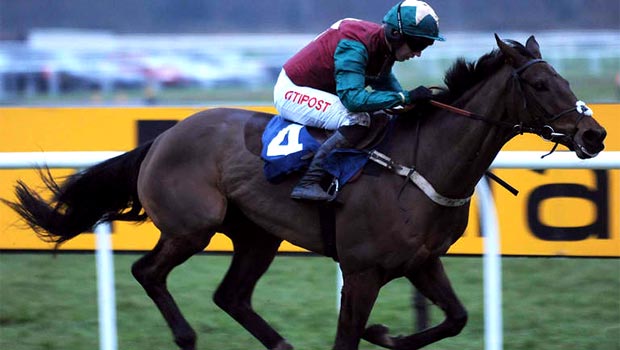 The Ian Williams-trained Ballyalton, winner of six of his seven starts, is on track for a return to Cheltenham in March.

The six-year-old, owned by golfer Lee Westwood’s father John, continued his winning ways when scoring at Cheltenham recently, and having got the better of the useful Oscar Rock at Newcastle the time before, is being aimed at the Cheltenham Festival.

He currently heads the betting for the Neptune Novices’ Hurdle, and will bid to give his trainer, based in Alvechurch, a first ever winner at the big meeting should he line up.

The horse was a surprise Christmas present from Lee Westwood to his father, who explained how it all came about.

“We’re very lucky and enormously excited about him. We were over at Lee’s house for Christmas two years ago and he entered the living room on Christmas Day wearing the light green and blue-striped-sleeve silks. I told him they would make him look silly and that he should definitely have a rethink, but I wasn’t quite expecting what Lee was about to say next.”

That turned out to be the fact that the colours were actually his father’s and that they would be sported by whoever rode his Christmas present, one Ballyalton.

Westwood senior continued: “Before we went to Warwick for his debut, I’d only ever been to the races once before and that was at Market Rasen as a kid in 1957. I was simply a spectator with my parents that day so racing is completely new to me and I’m still learning as we go along.

“We all gathered around the laptop and watched him win his point-to-point on the internet. We were all very impressed with the way he won that race over three miles on soft to heavy ground but none of us could have imagined we’d be talking about a potential Cheltenham Festival horse two years down the line. We’re in dreamland.”

His trainer revealed that the horse took a kick prior to his sole defeat on his hurdles debut at Southwell, otherwise he may well still be unbeaten.

Williams’ previous best hurdler was Brewster who won the 2004 Challow Hurdle at Newbury, and that is the next target for Ballyalton on Saturday December 28.