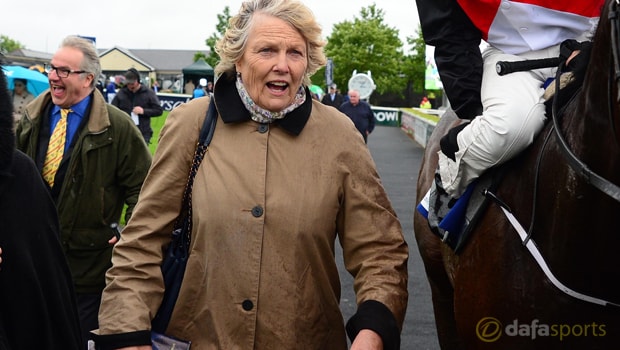 Jessica Harrington is targeting a Royal Ascot winner as the next landmark in what is already a dream 2017 for the popular trainer.

Harrington enjoyed a fairytale end to the jumps season in the spring and is now hoping for a helping of summer joy to add to her tally.

Sizing John gave her victory in the Cheltenham Gold Cup with her first-ever runner in the Blue Ribband.

There was also Grade One wins at Leopardstown and Punchestown for Sizing John, who established himself as the pre-eminent staying chaser in Britain and Ireland, while Our Duke scored a massively impressive win in the Irish Grand National at Fairyhouse.

It was a golden spell for Harrington and she has remained in good form through the beginning of the Flat campaign too.

She’s putting together a team for Royal Ascot later this month and admits it would be a big thrill to have a winner at the meeting.

“A Royal Ascot winner is the next ambition. I’ve had only a couple of runners there in the past but I’d like a winner,” she told The Irish Times.

Amongst her leading lights bound for Berkshire are unbeaten juveniles Alpha Centauri and Brother Bear.

The duo have two wins each under their belts this season and have potential for better things at Ascot, while Harrington is now less concerned about the likely ground conditions for the daughter of Mastercraftsman in the Albany Stakes.

“The one thing I didn’t want for her was that real Ascot firm. But the weather looks so broken over there at the moment that it shouldn’t be a problem,” she added.

“Alpha Centauri will run in the Albany and Whitefountainfairy could run in that too or she might wait for the Chesham on the Saturday. I haven’t decided yet. But Brother Bear will go for the Coventry.”

Harrington is also likely to have Torcedor in the Ascot Gold Cup on June 22. The Vintage Crop Stakes winner, unbeaten since joining Harrington’s string, is 17.00 to win that race.