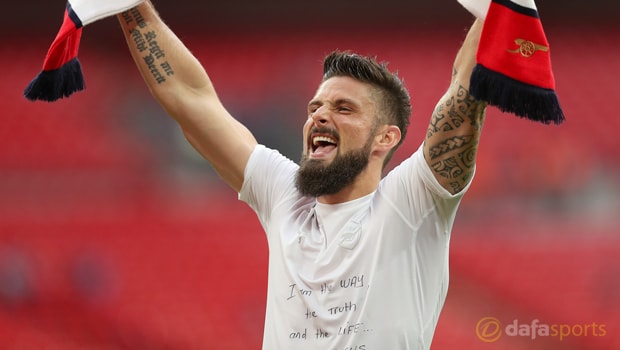 Olivier Giroud admits he may have to consider his Arsenal future as he does not want to spend another season on the substitutes bench.

Giroud still had an impressive goalscoring record despite his limited time on the field, as he netted 16 goals in all competitions, but he has now confirmed he may have to consider his future at the Emirates Stadium, as he cannot afford another season with such little playing time.

Speaking ahead of France’s World Cup Qualifier against Sweden, Giroud said: “It is true that I have had limited playing time but it was for a certain amount of time, it is true there were things against me.

I will not settle for another year with such little playing time.

“I will have to think carefully to consider it with my relatives and my advisers. It will be a decision that will be maturely thought about to have more playing time.”

The 30-year-old only recently signed a contract extension with Arsenal that runs until the summer of 2020 and he insists he would ideally like to stick with the Gunners, but that will depend on assurances over his first-team involvement.

“I still have two or even three years left on my Arsenal contract, for the moment my future is at Arsenal,” Giroud added.

“I feel good here, I want to win the Premier League with Arsenal. But I don’t know what the future holds.”

Arsenal could only finish fifth in the Premier League last season, their lowest placing in 21 years, but they are priced at 2.00 to secure a top-four position next term.