Alan King has ‘no worries’ about Yanworth

Posted by Vincent Henderson on February 18, 2017 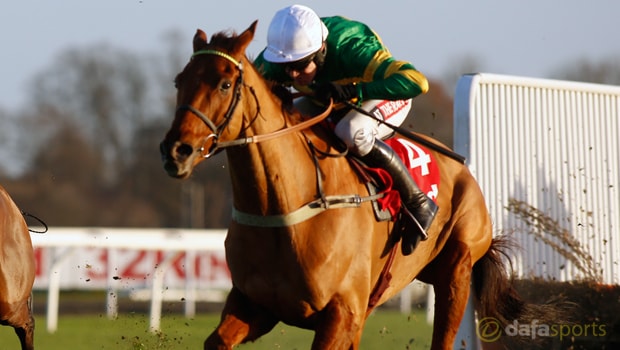 Alan King says he has no worries that Yanworth will jump well enough to win the Champion Hurdle next month at Cheltenham.

The JP McManus-owned Christmas Hurdle hero will put his Championship credentials on the line for the final time before the Festival in the Kingwell at Wincanton on Saturday afternoon.

Some have questioned whether Yanworth’s technique over the obstacles will hinder his chances amid the hustle and bustle of a Champion Hurdle, but Barbury Castle handler King has no such fears.

He points to a record that has seen Yanworth beaten just once over hurdles in seven starts and says his Grade One win at Kempton was further proof he is top notch.

King also revealed his intention to fit first-time cheekpieces on Yanworth at Wincanton in a bid to sharpen his jumping still further.

“Yanworth is in great form. The stiffer track at Sandown would have suited him better than Wincanton but the slow ground should offset that, and he coped with Kempton well enough when winning the Christmas Hurdle,” said the trainer.

“Yorkhill is the only horse to have beaten Yanworth in seven races over hurdles and he is unbeaten at two miles and, unlike some, I have no worries about his jumping being good enough to win a Champion Hurdle.

“He was sharp when schooling on Monday morning and we also hope that first-time cheekpieces might also make him that bit slicker at his hurdles.”

Yanworth will face last year’s winner Rayvin Black, 2014 hero Melodic Rendezvous and stablemate Sceau Royal amongst a field of seven in his bid to win the Grade Two Kingwell at Wincanton.

King’s charge is 5.50 to win the Champion Hurdle at Cheltenham on March 14 while 2014 winner Jezki is 9.00 to reclaim his crown for trainer Jessica Harrington.