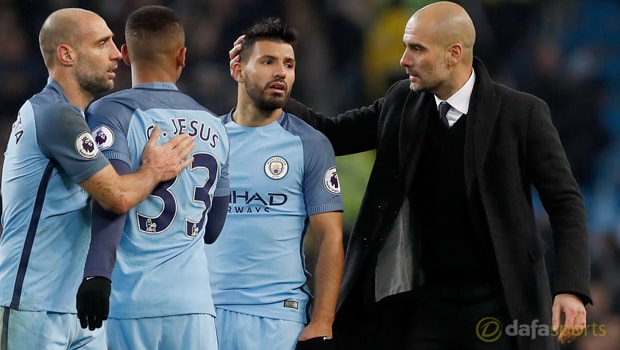 Pep Guardiola has no intention of asking Sergio Aguero to change his style of play despite dropping the Argentine forward in recent weeks.

Brazilian teenager Gabriel Jesus quickly displaced Aguero from the starting side after he arrived from Palmeiras in January.

But Guardiola now faces the prospect of being without Jesus for the rest of the season after he underwent surgery on a broken metatarsal on Thursday.

The Manchester City boss admits it will be two or three months before Jesus is fit to play again, with the likely prospect he’ll be out until pre-season.

The Spaniard says he won’t have a problem restoring Aguero to his starting XI. “It’s not easy for the player who does not play.

Sergio was more than professional. In the last game against Bournemouth after the injury to Gabriel he came in and played good,” he said.

“I don’t have doubts about Sergio Aguero or his quality because it was always there.”

Asked if he will try and get Aguero to change his game and become more like Jesus, Guardiola insisted that won’t be the case.

He says the former Atletico Madrid goalscorer has more than proved himself in his career with City to date and must continue to do what he does best.

“Sergio has to do what he has done since the beginning of his career, nothing more,” Guardiola said.

“Every player has how own qualities that he has to show. “When Gabriel played for the last three games I didn’t say to him ‘you have to do what Sergio does’.

City are 1.40 to beat Huddersfield in Saturday’s FA Cup last-16 tie while Guardiola’s team are 4.50 to lift the cup this season.