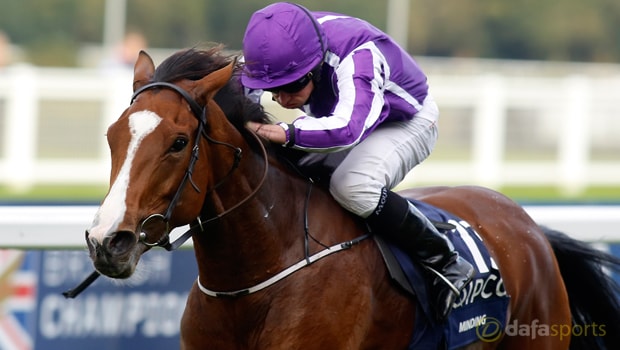 Trainer Aidan O’Brien admits that he may ‘run out of time’ in his attempts to get the brilliant filly Minding back to the racetrack this season.

Minding has not been seen in competitive action since making an impressive start to the campaign in the Mooresbridge Stakes at Naas in early May after suffering a setback.

O’Brien was hoping to have the seven-time Group One winner back to work this week but another setback means that is not happening.

The Ballydoyle supremo will instead by left waiting at least another month before he can move and he is now fearful that it might prove fatal for the four-year-old’s season.

“We had Minding pencilled in to start back driving on Monday but when John (Halley) X-rayed her, he wasn’t happy to do that.

“When John said to wait, we just have to wait. We’ll wait and see. “John always checks them before they start back and everything was in place to start off, but when he checked her he wasn’t happy.”

Capri win the Irish Derby for O’Brien on Saturday but it was a race where he also lost Wings Of Eagles to injury.

The Epsom Derby hero has since been retired, while Capri is set for a midsummer break.

“Obviously the lads [Coolmore] will talk among themselves and see what they want to do, but I’d imagine Capri will have a midsummer break and come back for an autumn campaign,” said O’Brien.