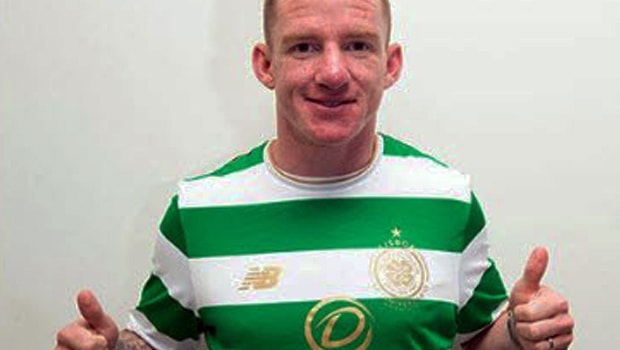 Celtic manager Brendan Rodgers was full of praise for new signing Jonny Hayes after his strong showing in the 1-1 pre-season friendly draw with Rapid Vienna.

Hayes joined the Hoops last month from nearest rivals Aberdeen and the Republic of Ireland international has earned the nod of approval from his new boss already.

Rodgers says Hayes’ quick movement is exactly what he looks for in a wide player.

The winger’s purposeful play won the penalty that was scored by Moussa Dembele as Celtic came from behind to draw in Austria.

“He made an incredible run from deep to get onto the ball and then go and create the penalty,” said Rodgers.

“That’s what Jonny can do. He can take you up the pitch. I like players with that very fast profile in the wide areas as he can go from one end of the pitch to the other very quickly.

“He has that ability to go inside and outside and I thought he was excellent when he came on.

He looked a real threat and he worked hard defensively and he’s always an outlet with his quality.”

With the Champions League qualifiers now a little more than a week away, Rodgers was content that his side stepped up the quality in their preparations.

“They finished mid-table in their league and got to the Austrian cup final against Red Bull Salzburg. It was a good test,” he added.

“They had played a game more than us – this was our second game and their third, but it was a great exercise for us and, like I say, important for us at this stage of pre-season in stepping up the quality of our opponent.

Overall, it was a very good game for our fitness.”