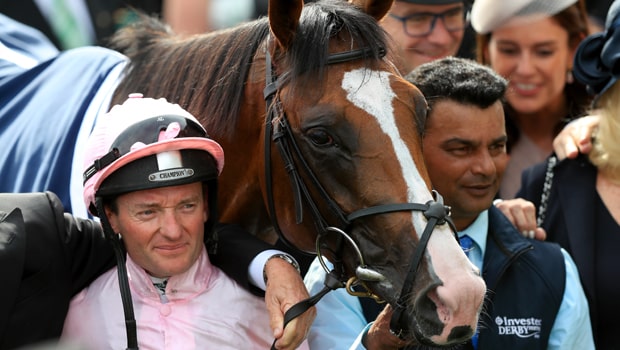 Trainer Aidan O’Brien was quick to praise stable star Anthony Van Dyck after his victory in the Investec Derby at Epsom on Saturday.

O’Brien landed a record-equalling seventh Derby win 18 years after securing his first with Galileo after a thrilling race on Saturday afternoon.

The County Tipperary trainer saddled seven of the 13 runners, with Sir Dragonet losing his unbeaten record after he finished fifth.

Anthony Van Dyck earned his shot in the race after winning the Lingfield Derby and he proved his worth after making a late charge down the inside rail.

Seamie Heffernan place his charge in mid-division for the majority of the race before going for home and beating Madhmoon, Japan and Broome.

When asked about his charge’s performance, O’Brien told reporters: “It’s incredible. I’m so delighted for everyone and privileged to be part of the team.

“The lads (John Magnier, Michael Tabor and Derrick Smith) put so much in and everyone who works in Ballydoyle and Coolmore – all the way along. There’s so many people, from the ground up to the riders, that I’d like to thank.

“I wasn’t sure (if he would win), they were all there with a chance and I knew Kevin’s horse was there (Madhmoon) and I knew he’d be in top shape and he’s a very good horse.

“We were just hoping and so delighted to be involved at that part of the race.

“I think the lads will decide, like they always do, but that is what we thought – that the winner would go back to Ireland (for the Irish Derby, at the Curragh). It is a nice progression for the horse.”