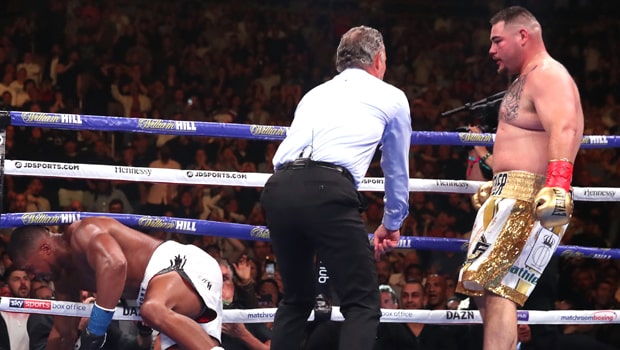 British heavyweight Anthony Joshua will look to secure an immediate rematch with Andy Ruiz Jr after losing his world titles on Saturday night.

Joshua travelled to New York to defend his IBF, WBA ‘super’ and WBO titles at Madison Square Garden but he was stunned by his rival.

The Londoner sent Ruiz crashing to the canvas in the third round before then going down twice himself in the same round. He managed to regain his composure and battle on to the seventh round, but he was backed up and knocked down twice.

The fight was eventually waved off by the referee and Joshua’s showdown with WBC champion Deontay Wilder now appears a long way off. Joshua says he has no excuses and he will do all he can to respond if they can arrange a rematch in November.

“I train hard, I stay dedicated and just got beat by a good fighter tonight,” Joshua told Sky Sports Box Office. “It will be interesting to see how far he goes, so good luck to him, but I’ve got to bounce back.

“This is all part of the story and the journey. Fire at heart, boxer by trade, but look he done well. He done what he had to do. Everyone has come out for a good night of boxing. It’s got people talking, so more life to the heavyweight division.

“You know when your legs are all over the gaff, you’re just trying to stabilise your mind, your whole body. It’s the first time really like that in a heavyweight fight. The one with [Wladimir] Klitschko I was just tired, but he’s a very grounded fighter.