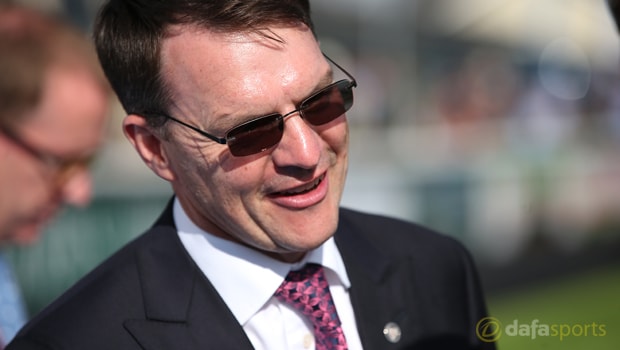 Trainer Aidan O’Brien believes the Prix de l’Arc de Triomphe could develop into an ‘obvious target’ for his superstar filly Minding later in the year.

The Ballydoyle handler is mapping out a four-year-old campaign for the outstanding daughter of Galileo, who pocketed no less than five Group 1 wins last term.

O’Brien is keen not to step Minding up in trip too soon, and he feels that the Arc – once again to be staged this year at Chantilly – on October 1 could be the logical place to try it.

He is also looking at heading across to France to start Minding’s season off, ahead of targets at Royal Ascot in the summer.

“We’re very happy with her and she has changed physically over the winter.

We decided to work her at Leopardstown rather than run her at Naas last weekend. Everything went well there and she might start off in the Prix Ganay in France,” said the trainer.

“The Tattersalls Gold Cup and Royal Ascot will be possibilities for her too.

Longer-term, we might hold off running her back at a mile and a half until later in the season, with the Prix de l’Arc de Triomphe being an obvious option,” he added.

Minding won the 1,000 Guineas at Newmarket last season before doubling her Classic tally in the Oaks at Epsom.

She added further top-level success at the Curragh and Glorious Goodwood over the summer before finishing a gallant third behind outstanding middle-distance colt Almanzor in the Irish Champion Stakes.

She brought the curtain down on a terrific season when landing the QEII Stakes over a mile at Ascot on British Champions Day in October.

The O’Brien-trained filly Rhododendron is 4.00 to win next month’s 1,000 Guineas at Newmarket.