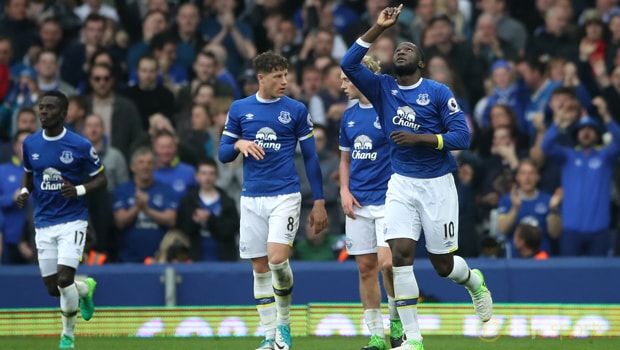 Everton striker Romelu Lukaku says he is very happy with his current form but will keep working hard on the training ground in order to improve his game further.

Lukaku, who arrived at Goodison Park in 2014 from Chelsea for a club-record fee of £28million, has been in outstanding form for the Toffees once again this season.

The Belgium international scored twice in the 4-2 victory over Premier League champions Leicester City on Sunday, taking his goal tally to 23 for the league this term.

He is currently four goals ahead of Tottenham’s Harry Kane in the race for the golden boot, while Arsenal’s Alexis Sanchez and Chelsea’s Diego Costa have bagged 18 and 17 respectively.

Everton’s talisman has netted 51 league goals from 104 appearances since making the permanent move to Goodison and his impressive performances have attracted interest from a number of top European clubs.

Ronald Koeman’s men are sitting seventh in the table, seven points behind Manchester City in fourth, and the Merseyside-based outfit are massive odds of 101.00 to finish in the top four.

Lukaku will be crucial if the Toffees are going to clinch an unlikely Champions League spot and the striker is hoping to improve on his already impressive displays.

Speaking on the club’s website, he said: “I’m just doing my job for the team. I’m happy with the form that I’m in this season. I want to improve and get better everyday, so as long as I’m helping the team, I am satisfied.

“For me, football is about winning games and doing my job which is scoring goals. I’m not really setting a target like I used to. I just look to improve.”

Everton play host to Burnley on Saturday and the home side are 1.44 favourites to win, a draw is priced at 4.50 while the Clarets are the big outside shot at 8.00.