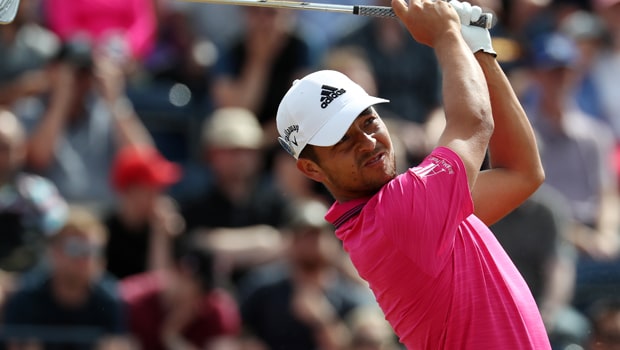 Xander Schauffele produced a stunning final round at the Tournament of Champions on Sunday to claim his second PGA Tour success of the season.

The American equalled the course record of 62 in Hawaii to finish on 23-under-par for the tournament, with his round including two eagles and four birdies at his final five holes.

The 25-year-old’s only dropped shot came at his very first hole of the day, while his victory appeared written in the stars with both his eagles coming when he chipped in from off the green.

Despite his impressive round, Schauffele still faced an anxious wait to see if he would claim overall glory, as overnight leader Gary Woodland could have forced a playoff had he birdied his final hole, but he sent his put wide of the mark.

That cued the celebrations for Schauffele, who was also victorious at WGC-HSBC Champions in October, and he has now moved up to a career-high of number six in the latest world rankings.

“This is the stuff you dream about,” Schauffele was quoted as saying by the PGA Tour website.

“But to actually pull it off, it feels awesome. I could see myself doing it, but it’s hard to believe just sitting here and talking about it.”

One of Schauffele’s next targets will be to claim victory at a major, particularly as he secured top-10 finishes at both the US Open and Open Championship last year.

The Californian’s next chance to break his major duck will be at the Masters in April and he is priced at 41.00 to secure overall glory at Augusta.