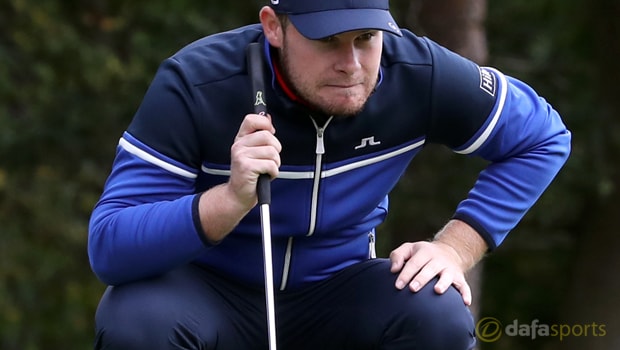 Tyrell Hatton is hoping a repeat of last year’s winning formula can see him go well in Scotland this week as he defends a European Tour title for the first time in his career.

The Englishman is back for another bit at the Alfred Dunhill Links Championship, played over three of Scotland’s most iconic tracks – St Andrews, Carnoustie and Kingsbarns.

Hatton equalled the course record on the Old Course at St Andrews en route to a four-shot win a year ago, where he teamed up with Northern Irish actor Jamie Dornan for the pro-am tournament that runs alongside the European Tour event.

With four days of tough Links golf, often in typically changeable Scottish weather at this time of year, Hatton believes have the right formula in his group was a key factor a year ago, and he’s sticking with it. “We had good fun last year,” he said.

“You know, having a bit of chemistry, if you like, is what this event is about and try and have a bit of a laugh.

I feel obviously that helped me the four days last year and looking forward to doing that again this year.”

His Alfred Dunhill win was part of a run of solid form that took Hatton as high as 14th in the Official World Golf Rankings.

He endured a lull this summer but comes back to Scotland having posted back-to-back top-10 finishes.

While he’s content with his own game heading into the week, Hatton is realistic in admitting the draw can be a massive factor in this unique event.

“Playing three courses, a huge part of that depends on what kind of draw you get.

You can play Kingsbarns or St Andrews on a really calm day and shoot decent scores and if you get Carnoustie, or to be honest any of the other courses, on a really tough day, then you’re going to struggle,” he added.

“That’s what links golf is about. Hopefully whatever sort of conditions there are, I can manage them well.”

Hatton is 19.00 to defend his title, while four-time Major champion Rory McIlroy is 6.00 to earn his first win of 2017 having finished second at the British Masters last weekend.