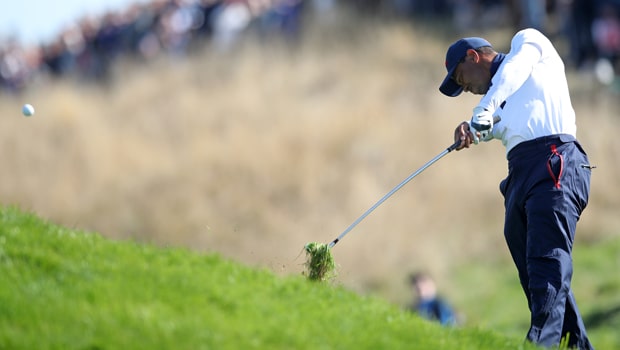 Tiger Woods is content that he remains ‘right on track’ for a tilt at the Masters in August next month, despite a recent neck problem.

Woods was forced to withdraw from a planned appearance at the Arnold Palmer Invitational with a stiff neck a fortnight ago but he played all four rounds in the Players Championship at Sawgrass last week.

The 43-year-old finished tied-30th and closed with a pleasing round of 69 on Sunday.

With a week off before he plays in the World Golf Championship Dell Technologies World Match Play, Woods has just one more event before Augusta National and says he’s happy with his progress.

“It’s right on track,” he declared before leaving Sawgrass. “I feel like I’m able to start shaping the golf ball both ways, which I’m going to need there. Just need a few more putts go in, but that’s about it.”

Former US Ryder Cup captain, and now television pundit, Paul Azinger speculated that Woods missing the Arnold Palmer could be a big worry with the Masters in mind, but the four-time Green Jacket winner doesn’t share that type of fear. After his previous injury woes, Woods says he has to do what is required to keep his body in check.

“I needed that week off,” he explained. “I needed to get (the neck) sorted and, as I was telling you guys earlier in the week, if my back gets tight, it’s going to go up the chain and so I’ve got to start at ground zero, get my lower back moving properly, get the firing sequence good, after that the rest of the chain will take care of itself.”

Woods is 15.00 to win the Masters at Augusta, while Players champion Rory McIlroy is 8.50 to land his maiden Green Jacket.