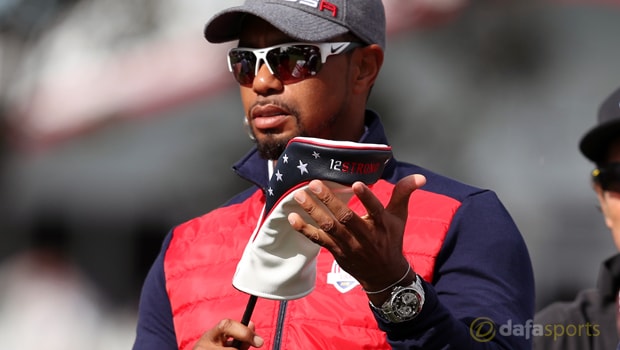 Tiger Woods suggested the challenge of scrambling for a score at the Valspar Championship in Florida appealed to him more than going low.

The 14-time Major winner carded a one-under-par opening round that was enough to earn him a share of eighth place.

In windy conditions at the Copperhead Course, Woods shot 70 to finish three strokes behind surprise leader Corey Conners of Canada.

The 42-year-old American outshone playing partners Jordan Spieth and Henrik Stenson in round one, with Spieth five-over par and Stenson on three-over.

Woods had five birdies on his card and four dropped shots and said afterwards that working hard for a decent score is something that appeals more to him than being in a birdie shootout.

“I enjoy when par is a good score, it’s a reward,” said Woods.

“There are some tournaments when about four holes you don’t make a birdie you feel like you’re behind.

“[Here], you know, made a couple birdies, all of a sudden that puts me fourth, fifth, right away. That’s how hard it is.

It’s the reward to go out there and make a couple birdies here and there and I like that type of challenge.”

Woods has been making admirable progress since returning to regular PGA Tour action this year after his latest bout of back surgery.

Given the conditions in Florida, he felt round one of the Valspar was probably his hardest test so far and acknowledged that he, along with Spieth and Stenson, had struggled at times.

He added: “This was the hardest of all the tests because the wind was all over the place. Really brutal out there.

We as a group got fooled a lot today. Into the wind it felt like you just hit walls and downwind it was you couldn’t pick an angle.

“I think I feel like I’m pleased with every aspect of my game. I drove it well, I hit a lot of good iron shots today and I had some good speed on the putts.”

Woods is 15.00 to win the Valspar Championship on Sunday, while first round leader Conners is 34.00.