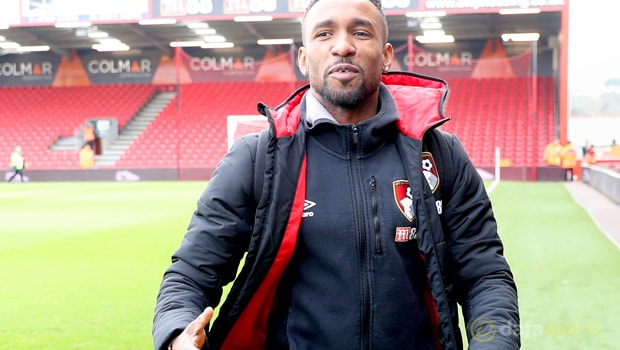 Eddie Howe says Jermain Defoe is looking good after his recent spell on the sidelines and the Bournemouth manager is confident the striker can make a difference if he’s chosen to play against Tottenham on Sunday.

England international Defoe arrived at the Vitality Stadium in the summer, joining from relegated Sunderland on a free transfer, and his acquisition was seen as a real coup for the south coast club.

However, the 35-year-old, who spent a season on loan with the Cherries during the 2000-2001 campaign, has struggled with injury and he has been limited to just nine Premier League starts.

The Beckton-born star has scored just three league goals and his drop in form, coupled with reduced playing time, has left doubts over his spot in England’s squad for the 2018 World Cup in Russia this summer.

Defoe will be eager to turn out against former employers Tottenham, who he scored 143 goals for over two spells, on Sunday at the Vitality and Howe is confident the striker will perform if he gets the chance.

“Jermain has looked good since he has come back. He was out for quite a long time and made a difference in the Newcastle game,” he said at a press conference.

“I’m sure Jermain will be keen to play, his motivation is always high and he’s always had that desire to score goals.”

Bournemouth, who have drawn their last two matches, are 6.00 outsiders to pick up all three points, a draw is priced at 4.33 while the visitors are 1.53 favourites to bounce back from the midweek loss to Juventus.

The reverse fixture back in October ended in a 1-0 win for Spurs and the London club have never lost against the Cherries.