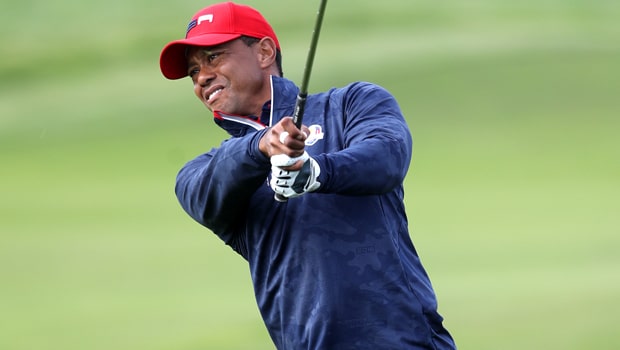 Tiger Woods acknowledged he will need to shoot a low round on Friday if he is to have any chance of winning an eighth Farmers Insurance Open.

The 14-time major champion mixed three bogies with five birdies on the more difficult South Course at Torrey Pines, as he signed for a two-under-par score of 70 on Thursday.

That leaves the American eight shots behind first-round leader Jon Rahm, who took advantage of the easier conditions on the North Course, carding two eagles and seven birdies on his way to the top of the leaderboard.

Indeed, on average, the North Course played almost three shots per round easier than the South on Thursday and Woods acknowledged he will have to card a low score when he takes to the easier 18 on day two.

“Overall, shooting a couple under par on the South Course is not so bad, but now I’m forced to have to shoot a low one tomorrow over there on the North,” Woods told reporters.

“I could have shot something around 68, 67 today pretty easily. I hit a lot of good putts that were around the hole that just didn’t go in.”

Woods, who is priced at 26.00 to go on and win the tournament for the first time since 2013, is playing in his first PGA Tour event of the season and he conceded that there was an element of rustiness about his first-round performance.

He added: “I thought I drove it pretty well even though I missed a few fairways, but my feel was a little off in my distances with my irons. That’s just from not playing at a competitive speed in a while.”