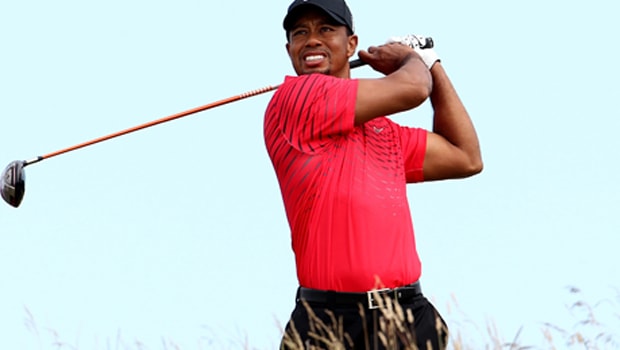 Tiger Woods is happy with his new putter despite a relatively slow start to the Quicken Loans National at TPC Potomac at Avenel Farm.

The former world number one has been experiencing a tough time on the greens lately and has added a TaylorMade Ardmore 3 mallet-style putter, ditching the blade style he used for 13 of his 14 major championship wins.

Despite making just 48 feet and seven inches of putts in round one, leaving him ranked 92nd of 120 players in Strokes Gained: Putting as he carded a grinding even-par round of 70, Woods declared himself pleased with his new short stick. Crucially, the 42-year-old reiterated his commitment to the change.

“We have the grooves in there just like when I was with Nike, helps roll the ball better, faster, earlier on the greens,” he said.

“I’ve always struggled on greens that are a little on the slower side… so it was a nice thing to move to a putter that rolls a little bit quicker, it has more swing to it. I’ve always liked putters that have some swing to it.”

Woods missed three putts inside 10 feet but suggested he had putted well and feels the results will soon follow.

“I rolled it well, I really did. I hit a lot of good putts early that didn’t go in,” Woods added.

“If I’m hitting putts on my line with my speed then I’m happy. They’ll go in eventually.”

Woods is level-par and tied-48th at the Quicken Loans after round one. Andrew Landry and J.J. Spaun lead on seven-under par, with Billy Horschel and Andrew Putnam one stroke back in second spot.