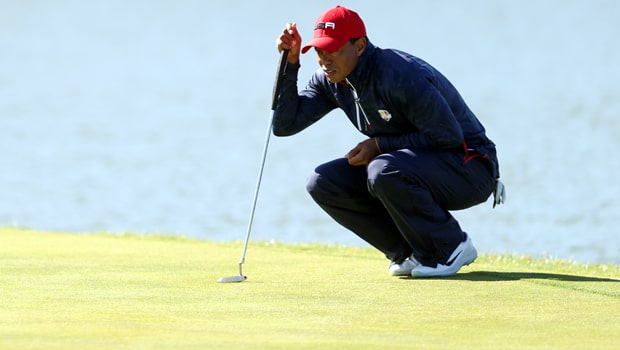 Tiger Woods earned an opening day win over Aaron Wise at the World Golf Championships – Dell Technologies Match Play in Texas, though he admitted he’d probably be too far behind to win the event had it been stroke play.

The three-time champion returned to the event for the first time in six years with a winning start, but it wasn’t exactly pretty golf. Woods made four birdies in his 17 holes alongside four bogeys, enough to outlast a wayward Wise.

The 80-time PGA Tour winner was two-up through two holes, though he’d find himself one down at the turn. The 22-year-old Wise had more birdies than his illustrious opponent with six, but also carded seven bogeys and a double bogey in a frustrating display.

“I won the match. It wasn’t exactly the best of golf out there from both of us. “We gave a few holes away with bogeys and three-putts, and we won a few holes with some good birdies. It was an emotional round because there weren’t a lot of halved holes.”

Former NCAA champion and winner of last season’s AT&T Byron Nelson Championship, Wise admitted he was somewhat nervous early in the round, though he feels he’ll take plenty away from having faced Woods, one on one.

“It was pretty cool to get in his group today, be able to play him, especially in match play, where it’s me against him. It was a fun experience,” Wise said.

“I really respect what he’s done in the game, and it was pretty cool to be able to watch him compete today and be alongside of him.”

Woods faces Brandt Snedeker on Thursday in his second game. Snedeker made a closing birdie on Wednesday to halve his match with Patrick Cantlay. Woods is 1.62 to overcome Snedeker and 21.00 to win the WGC-Matchplay event this week.