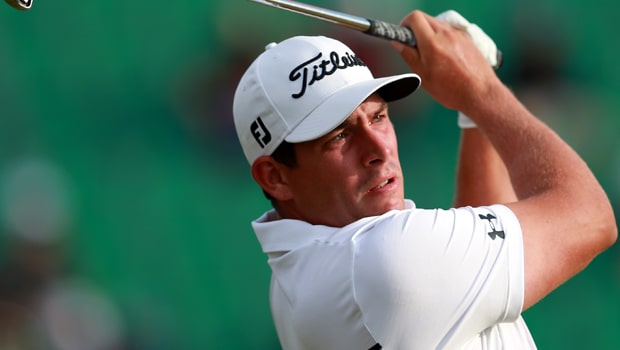 Scott Stallings and Tray Mullinax made light of a near eight-hour weather delay to hit the front at the Zurich Classic of New Orleans.

The PGA Tour’s unique team event is a two-man effort, with day one playing in four-ball format. Stallings and Mullinax were amongst the early starters but, with lightning forecast, they knew they were in for a long day.

In the end they had to wait around for more than seven and a half hours, but they were able to complete round one just before darkness descended.

They did so after combining for an 11-under par 61 to lead by a single shot. Martin Laird/Nick Taylor are the closest finishers at 10-under par, with Brian Gay/Rory Sabbatini are also at 10-under with four holes left to complete.

Remarkably, Stallings and Mullinax didn’t make birdie once on the same hole through round one, something they admitted was strange and pleasing. “Kind of an odd day,” Stallings said.

“Obviously we played a lot more this morning than we thought we were going to, but to play 18 holes…and we not birdie the same hole and come out at 11 under – if you told us that at the beginning of the day, we’d have definitely taken it.”

This is their first year playing as a partnership. A year ago, Stallings was with Australian Aaron Baddeley while Mullinax, a late addition to the field, played with Jonathan Randolph. They are close friends and made the agreement then to try and come back together this time around.

“We just kind of decided last year, hey, if we’re in next year, we’re just going to play together,” Mullinax said. “Been about a year in the making.”

The duo are 15.00 to go and win the Zurich Classic of New Orleans this weekend. Tournament favourites Jason Day and Adam Scott are seven-under par through 16 holes of their first round, four back of the leaders. The Australian duo are 9.00 to win.