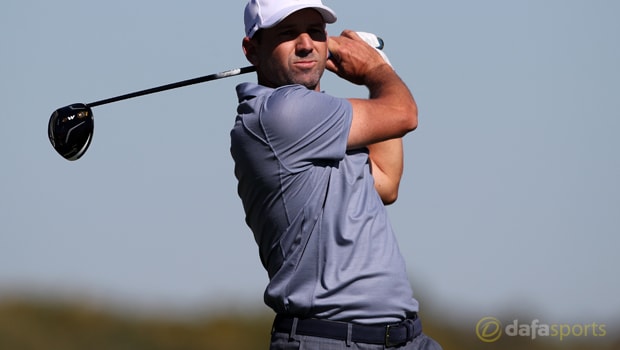 Spaniard Sergio Garcia admits it would be a dream come true to follow his idols by winning the Masters but he concedes he must remain calm on Sunday.

Garcia, 5.00 to win the event, has yet to win a major title but he will head into the final round in a tie for the lead on six-under par with England’s Justin Rose.

Garcia has remained consistent throughout the first three days and he shot a round of 70 on Saturday to continue his push for glory at Augusta.

Rose fired home a round of 67, while Rickie Fowler maintained his charge with a 71. The American is alone in third just one shot ahead of countrymen Jordan Spieth, Ryan Moore and Charley Hoffman.

Ahead of Sunday’s final round, sixteen players are within six shots of the lead but Garcia is hoping to emulate fellow Spaniards Seve Ballesteros and Jose Maria Olazabal.

Sunday would have been Ballesteros’ 60th birthday and Garcia admits it would be fantastic to win his first Green Jacket this weekend.

He told Sky Sports: “[Seve] and Olazabal, I said it, I think it was yesterday, they were both my big idols growing up, so it means a lot.

“I don’t want to get ahead of myself, but it would mean ‑ I don’t even know how much it would mean to be able to join both of my idols as a Masters winner, it would be nice to have a chance and hopefully do it.

“Jose sent me a beautiful message on Wednesday night, and he has a good touch when it comes down to those things. It really meant a lot.

“It was fun to play well again, to go through a Saturday at the Masters with a chance at winning, and, you know, to be up there going into tomorrow.”