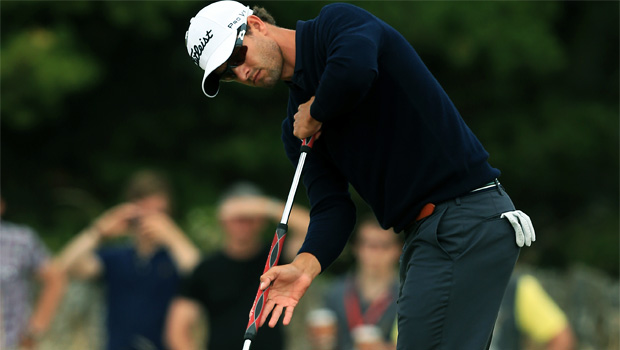 Adam Scott says another win is just around the corner after he claimed The Barclays in Jersey City by one shot.

The Australian kept his cool, while everyone else was losing their own, to fire a final-round score of 66 and it proved to be enough as the rest of the field fluffed their chances.

Scott watched on from the clubhouse as Kevin Chappell missed a birdie putt on the 18th to take it to a play-off, while Justin Rose also three-putted the last to finish on 10 under, also one shot behind.

Tiger Woods mounted a late rally despite complaining of back problems but he too missed a birdie putt at the last to hand Scott the victory.

The win moved Scott up to second place in the FedEx Cup standings and he is confident that more wins are in the pipeline over the next few weeks.

“I am really happy with my game,” Scott said on CBS. “It was a positive to get back into the mix at the other majors and I am pushing hard to get another win – if not this week then I will try harder next week.”

Graeme Delaet was the fourth player to claim a share of second place when he picked up four birdies early on the back nine but his impressive round of 65 was not enough.

Two players who were right in the mix, Matt Kuchar and Chappell, had disastrous final rounds and ended up finishing way off the pace.

Kuchar shared the overnight lead but a round of 78 saw him slip all the way down to 19th, while Chappell, who started the day in third, carded a 76 to drop to 15th.