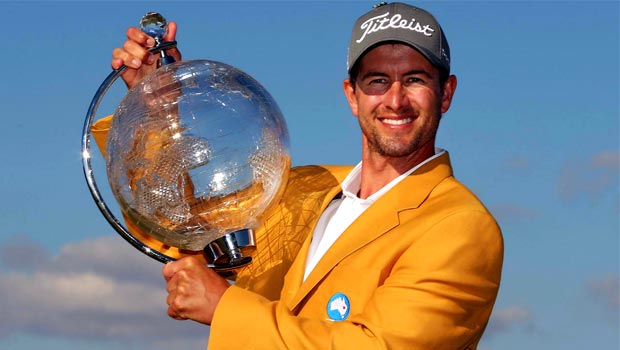 Adam Scott survived a “shaky” final round and a late challenge from Matt Kuchar to successfully defend his Australian Masters title at Royal Melbourne on Sunday.

The in-form Australian and US Masters champion set himself up for a comfortable day as he went into the final round with a commanding four-shot lead over the chasing pack.

Scott hit a birdie on the third to stretch the lead to five, before he started to lose his way and world number eight, Kuchar, found himself two shots ahead when he fired a birdie on the 15th as Scott double-bogeyed the 14th.

The round then swung back into Scott’s favour as he hit back with a birdie at the 15th and he found himself level again moments later when Kuchar bogeyed 16.

And Scott added the Masters title to last week’s Australian PGA Championship success with pars over the final three holes as Kuchar’s double bogey at the 72nd hole proved costly.

Scott, whose final round 71 saw him finish the tournament at 14 under, two shots ahead of his American rival Kuchar with Vijay Singh on his own in third on 10 under, told sportal.com.au: “It was a little shaky out there, I have to say today, but I felt okay.

“I just felt like I was around the mark (and) I wasn’t ever in too much trouble.

“I think even if I was one shot behind I knew there was going to be an opportunity down 15 and I just needed to hang in there.

“I managed to just hang in long enough.”

Scott will stay in Melbourne for the World Cup at the same venue this week, before he aims to match Robert Allenby’s 2005 feat by adding December’s Australian Open in Sydney to his Australian PGA and Masters titles all in the same year.