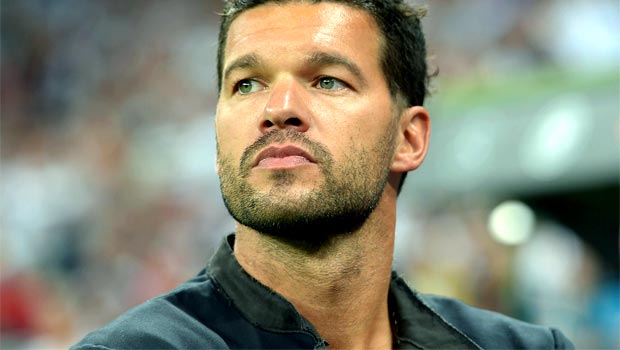 Michael Ballack had a dig at England ahead of Tuesday’s friendly at Wembley by claiming Three Lions are “a bit behind” the likes of his country and Spain.

The former Chelsea midfielder, who won 98 caps between 1999 and 2010, feels Germany are a superior side to Roy Hodgson’s men and that is reflected by their current standing of second place in the world rankings.

And Ballack feels it is time England made an impact at a big tournament, such as next summer’s World Cup finals in Brazil, with the quality in their current squad.

“I don’t see England as being the same level as teams like Germany or Spain. They’re a bit behind,” Ballack told BBC Radio 5 Live’s Sportsweek.

“They have a lot of talented players, but are still a big name. We always had great respect when we played England. This is not a real friendly game. England are playing Germany and it’s always a big rivalry.

“At the next World Cup England must use their name, use their quality and have confidence. Then everything is possible.
“When Germany goes to a big tournament we know we have to deliver because teams before us have done it.

“We don’t want to be the team that goes out of the tournament early, so that creates a certain type of pressure.”

Germany will go into Tuesday’s clash without injured midfielder Sami Khedira, who ruptured knee ligaments during the friendly draw with Italy on Friday.

Captain Philipp Lahm and Bayern Munich team mate Manuel Neuer have returned to Germany, while Mesut Ozil will also be excluded as coach Joachim Low plans to look at some fringe players.

England will have Joe Hart back in goal after he sat out the 2-0 friendly defeat against Chile, but Manchester United defender Phil Jones has returned to his club after picking up an injury on Friday.

Skipper Steven Gerrard, Daniel Sturridge and Rickie Lambert will all look to shake off minor injury problems to feature after they sat out the Chile game.