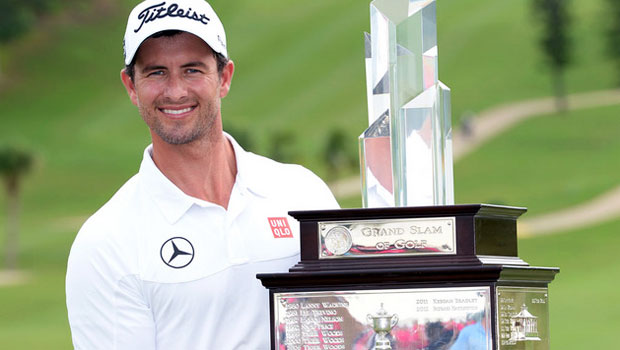 Justin Rose was beaten by the better player on the day as Adam Scott overturned an overnight two-shot deficit to win the PGA Grand Slam of Golf thanks to a course-record 64.

Australian Scott, who had struck 69 on the first day, finished on eight under overall in the end, two shots clear of US Open champion Rose after a fantastic performance on the back nine.

Having carded a 67 on Tuesday, Rose initially looked in good shape for the victory as he extended his advantage to four by the end of the front nine on day two.

However, it all unravelled for the Englishman as he needed a drop following a poor tee shot at the 16th to give Scott the chance to take the lead. Then a par at the next, coupled with Masters champion Scott’s superb eagle three, gave him a two-shot lead with one to play.

A par on the last secured the pink jacket for Scott, as he added it to the green one he won in a thrilling play-off at Augusta in April.

He said: “I didn’t have my best game all week really and I’d have been surprised (to win).

“I started with a two-shot lead and somebody had to shoot well to beat me. When you’re in that position you want to close it out, but when somebody finishes it out like that, you have to tip your hat and say you were beaten rather than losing.”

Scott, meanwhile was predictably delighted with the success even though he admitted it looked unlikely after the first nine.

“Obviously, I’m thrilled to come out on top,” he said. “Standing on the 11th tee, didn’t look like a score like that was going to be possible. But I played very well and managed to slowly claw away at Justin.”

Jason Dufner was a distant third in the tournament that pits the major winners together as he finished on three under, while defending champion Padriag Harrington – who played instead of Open winner Phil Mickelson – was further back on +3 overall.