Posted by Jason Stepford on November 9, 2013 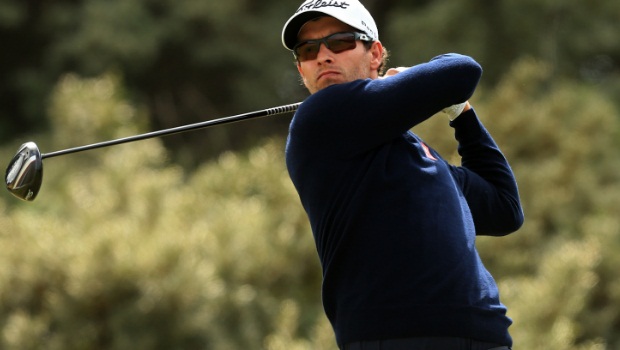 Adam Scott continued to impress on day three of the Australian PGA Championship as he extended his lead to three shots going into the final round.

The event at Royal Pines marks the first time Scott has played in his homeland since breaking his major duck at the Masters earlier this year and he hasn’t disappointed the local fans, looking characteristically smooth throughout the opening three rounds.

On a blustery day on the Gold Coast, the 33-year-old kept his cool to card a level-par 71 to remain on 10-under overall, three ahead of nearest rivals Rickie Fowler and David McKenzie, with another home favourite, Marc Leishman, five off the pace after an impressive 68.

Fowler led the field following a first round 63 and after falling away on Friday, got back on track as he matched Scott’s 71 on moving day, while McKenzie fired five bogeys and four birdies to record a 72.

Victory for the man from Adelaide will see him complete his country’s major sweep, following previous victories in both the Australian Open and the Australian Masters.

However, he is taking nothing for granted after what he admits was a tough third day at Royal Pines.

“I think it was a grind for everyone, I didn’t see too many good scores out there,” Scott said. “The course was playing tricky, the wind gusting across the greens made it hard to make a lot of putts. I certainly didn’t have my eye in and when I forced it, I three putted.

“So I figured it wasn’t my day and tried to be a little better on the back nine, which I managed.”