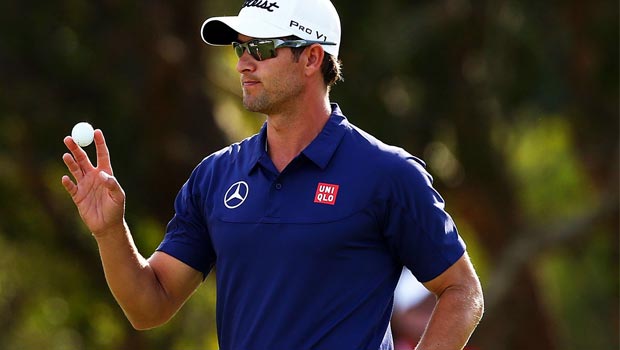 Adam Scott’s remarkable season continued as he fired a course record 62 in the first round of the Australian Open in Sydney.

Canadian Ryan Yip shot 65 to tie the previous course record to hold second place, with David McKenzie sitting in third following his round of 66.

Two-time champion Aaron Baddeley also remains firmly in the mix following a 67, which leaves him in a pack tied for fourth.

Scott was the main man though as he looks to become only the second player to win the Australian PGA, Masters and Open title in the same season.

Scott, who has also won the US Masters this season, picked up birdies at the first six holes before parring the next eight before birdieing the last four.
“It was a beautiful day for golf, I came out hitting great shots and didn’t have much work to do to clean them up in the first five holes and had a nice putt on my sixth hole and I was really rolling at that stage,” he said.

“But I think I’ve gone through a rollercoaster of emotion out there today from cruising after six holes to having to work pretty hard.

“Nothing much was going my way, I missed a green, felt like my swing was leaving me again, it’s just amazing how in 18 holes you can do a 360 degrees of emotion and mood swings and everything.”

Elsewhere Rory McIlroy, who is still looking for his first win this year, fired a 69 to leave himself seven shots behind Scott.

“I drove the ball pretty well off the tee but just didn’t get any reward on the greens,” he said. “I missed three short ones and that was just wasteful as I felt it could have been a lot lower, given that I am driving the ball the best I feel I ever had.

“It’s just a matter of being more efficient and putting better, and that’s really it as I only played the par fives in one under par, and the way I am driving it, I should be playing those in four under.”