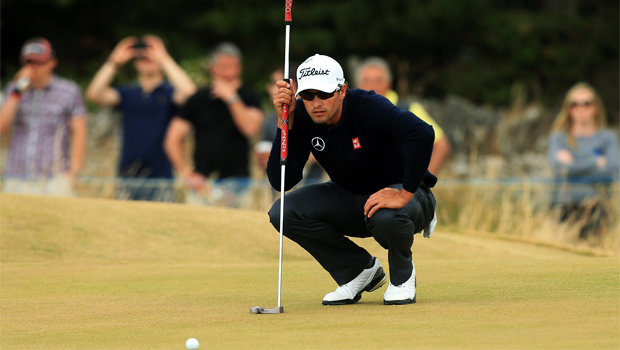 Adam Scott admits he is still affected by nerves at major tournaments, despite breaking his duck at the Masters earlier this year.

The Australian finally got his hands on one of golf’s biggest prizes at Augusta in April but Scott doesn’t think the fact he has a major title to his name relieves any pressure.

Scott will compete in the US PGA Championship this week in a bid to land a second major, but he doesn’t think his task is any easier following his Masters success.

“I don’t feel much different,” said Scott. “I was nervous at the US Open and the Open Championship and I think I’ll be nervous on the first tee here at the PGA.

“I haven’t won it so it’s something I want to win and that brings nerves. I’m not thinking I’ve won one so it doesn’t matter. Of course it matters.

“The nerves are there. It’s all about controlling it.”

The world number five came third at last month’s British Open and has an impressive record in recent majors, finishing inside the top 15 in six of the last seven events.

Scott came close at the British Open but four straight bogeys combined with Phil Mickelson’s sensational final round saw the title slip away.

The 33-year-old remains confident of his chances ahead of the US PGA Championship and feels he is in good form as he prepares for the tournament at Oak Hill Country Club.

He added: “For some people, the second (major) is always the hardest.

“We’ll see about that, but I’m right where I want to be. I’m trying to put myself in there every time and I’d love to give it a shake here.”