Ryan Palmer ready to grind it out 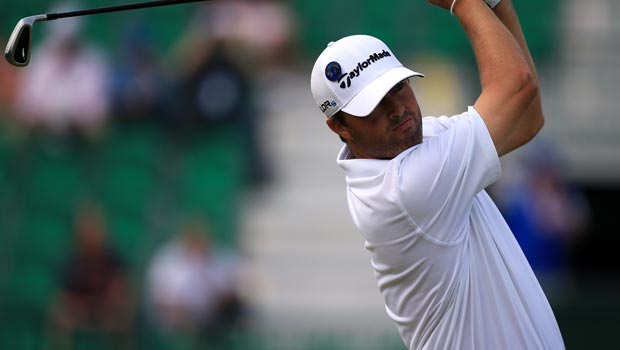 After enjoying a superb opening round with the putter, Ryan Palmer was delighted with the way he battled in adversity to at least hold a share of the lead at the Deutsche Bank Championship at the halfway stage.

The American was two shots clear after his first round but found life a little more difficult on Saturday, particularly on the front nine as he carded three birdies along with two bogeys and a double-bogey.

The back nine didn’t start too well with a bogey at the tenth but Palmer recovered with birdies at the 12th and 18th to post a level-par 71 for a share of the lead at eight-under par.

“The putter was there today as well, but I didn’t have as many chances. I really had to grind it today,” Palmer said.
“I got off to a good start obviously, but a couple of bad swings there on the front nine. I still made some good pretty birdie putts I felt.

“Had some good saves. That up and down on 18 was big. Proud of the way I hung in there today, and salvaged even-par.”

Australian Jason Day propelled himself to the top of the leaderboard alongside Palmer (Day 1.55, Palmer 2.47 – Money Line, 3rd Round 18 Holes) after a blistering front nine saw him post a three-under par round of 68.

Day fired in five birdies to hit the turn at -10 but he was unable to maintain that sort of pace and a bogey at the last – his third coming home – forced him to settle for a share of the lead.

Matt Kuchar and Billy Horschel are a shot back in a share of third at -7, one clear of a group of five, consisting of Keegan Bradley, Patrick Reed, Bill Haas, Russell Henley and Webb Simpson.

World number one Rory McIlroy moved into contention after following up his opening 70 with a two-under par 69, although Ryder Cup hopefuls Luke Donald and Ian Poulter slipped down the leaderboard with rounds of 74 and 73 respectively.