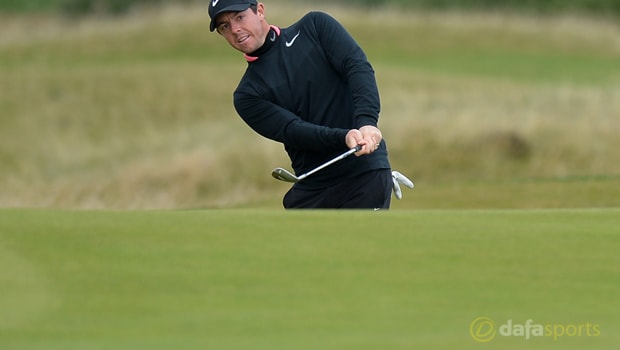 Northern Ireland’s Rory McIlroy insists he is excited for his final-round battle with Patrick Reed as he looks to win his first Masters title and complete a career Grand Slam.

McIlroy, 2.63 to win the event, moved up two places on the leaderboard at Augusta National after firing a superb 65.

He will start Sunday’s round on 11-under par although the four-time major winner will be three shots behind American Reed.

Reed’s 67 has given him a great chance of winning his first major, although his countryman Rickie Fowler is also in contention on nine-under after a round of 65, and he can be backed at odds of 8.50 to win his maiden major.

Spain’s Jon Rahm is one shot further back, while Sweden’s Henrik Stenson will start the day on seven-under par and he is 34.00 to win.

McIlroy, who had a titanic tussle with Reed in the Ryder Cup singles two years ago, came close to winning the Masters in 2011 before a Sunday meltdown and he insists he will enjoy the final day this time around.

“I’m looking forward to it,” McIlroy told Sky Sports. “Obviously we started on the first tee all square at that Ryder Cup and he’s a few shots ahead of me, but I know what it’s like to be in that position.

“It isn’t easy, especially if it’s your first time. So I’m going to go out there and try and freewheel it and play as if I’ve nothing to lose and all to gain, which I do.

“He’s obviously playing very well and if he continues to play like that I’ll need another round like today to have a chance.

“I’ve always said that the final round in 2011 was a huge turning point in my career. It was the round that got me ready to win major championships.

“This is my next opportunity to be in a final group again at the Masters and put all those wrongs right. I feel like I learnt a lot from it and I come in a much better player, a much more mature player, and I feel that will be a huge help for me.”