Sean Dyche: We have a European chance 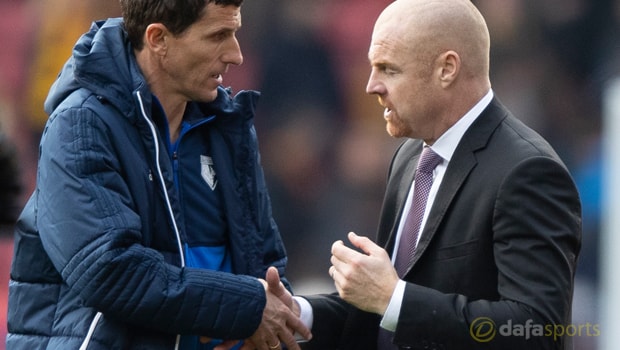 Burnley coach Sean Dyche insists his side have given themselves a “fine chance” of thinking about European football after a fourth straight win at Watford.

The former Watford boss returned to his old stomping ground on Saturday but his side were pushed all the way by the Hornets at Vicarage Road.

Javi Gracia’s troops took the lead on the hour mark as Roberto Pereyra found a way past Nick Pope.

Burnley though have been in good form of late and scored two quick-fire goals to turn the game on its head.

Sam Vokes stepped off the bench and scored with his first touch in the 70th minute, while Jack Cork headed home from a free-kick just three minutes later.

The result leaves Burnley six points ahead of Leicester in the race for seventh, although they still need Southampton to not win the FA Cup.

When asked about the possibility of Europe, Dyche told Sky Sports: “There’s a lot of games to go.

The lads have given themselves a fine chance of that sort of thinking, and the feeling in the group and the mentality between the fans and the players and long may that continue.

“The reward for the players is having gone into the last eight games of a Premier League season knowing the first marker has been achieved and that’s a big sign of progress for us.

“Now they can look to enjoy their football. Even today, we didn’t play as well as we can but we found a way.

“Sometimes it’s down to a bit of luck, we had that today, sometimes it’s down to the ugly stuff, there were periods in the game when we did all the details, had the right shape, and people working very very hard, which is as important for us as the skilful side of the game.”