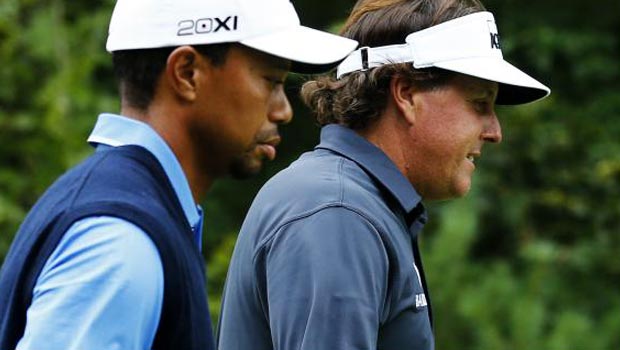 Rory McIlroy believes former world number one golfers Phil Mickelson and Tiger Woods are no longer dominating the sport because age and injuries have caught up to them over the last few years.

McIlroy, 25, who goes into this weekend’s PGA Tour Championship as 4.50 favourite, is not yet ready to declare a changing of the guard – despite the vastly differing results of the two Americans to his own in 2014.

“They’re just getting older,” McIlroy said as he prepared for the event at East Lake club.

“Phil’s 43 or whatever [actually 44], and Tiger’s nearly 40 [39 in December]. So they’re getting into the sort of last few holes of their careers, and that’s what happens.

“It obviously just gets harder as you get older. I’ll be able to tell you in 20 years how it feels.”

McIlroy also pointed out that Woods, who finished 218th in the FedEx Cup standings, has been injured and hasn’t had the opportunity to play.

“When he gets back to full fitness, you’ll see him back here,” said McIlroy, who also noted that Mickelson nearly won the PGA Championship last month, finishing second behind him.

Woods has earned barely over 100,000 dollars in prize money this year with no top ten finishes in seven events while Mickelson, who is missing the Tour Championship for the first time in the FedEx Cup era that dates to 2007, has one top ten from 21 events.

McIlroy, however, could go face to face with Mickelson at the Ryder Cup in October when Europe are the 1.52 favourites to retain the trophy over the US (2.58) at Gleneagles.