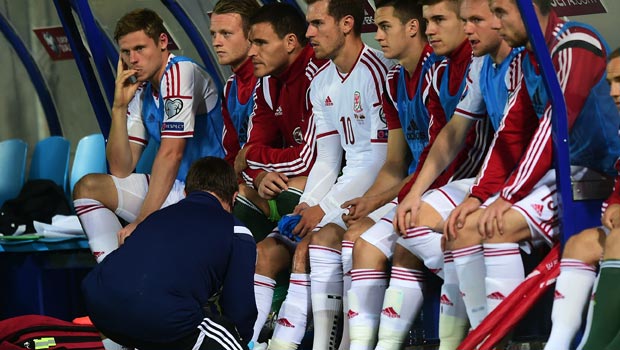 Arsenal boss Arsene Wenger is hopeful that Aaron Ramsey will be in contention for Saturday’s Premier League meeting with Manchester City and that his ankle injury will prove “short-term”.

The midfielder’s knock – suffered during Wales’ Euro 2016 qualification victory on an artificial pitch in Andorra – is not as bad as Wenger feared when he first learned of the injury.

“The first news is not bad,” said the Arsenal boss. “He will be assessed today, he has a little chance to be available for Saturday.
He had an ankle sprain, it is a minor one, that is for sure.”

Ramsey, who recovered from a broken leg he suffered against Stoke in February 2010, was forced to miss a crucial period last season with a niggling thigh problem, which saw the Gunners’ title bid fade before he returned to score the winning goal in the FA Cup final at Wembley.

And Wenger admits he was ‘haunted’ by the prospect of losing his goalscoring midfielder for a lengthy period.

“I am relieved because I had been haunted in my head by last year’s injury that was much more serious than expected, at the start it was a little muscular injury and then it was three months.

“Even if he is not completely ready for Saturday, it is a short-term injury.”

Arsenal should have Mikel Arteta and Kieran Gibbs back in the squad to face the Premier League champions following their fitness issues before the international break.

Playmaker Mesut Ozil has shaken off the ankle problem which saw him return to London from Germany ahead of schedule, but Theo Walcott is still a couple of weeks away from full fitness.

England forward Danny Welbeck joined the Gunners on transfer deadline day from Manchester United, and could be given his debut in a central attacking role against City as Olivier Giroud faces several months of rehabilitation from a fractured leg.

Arsenal are 2.90 to beat Manchester City on Saturday with the champions 2.42 to claim all three points and a draw available at 3.20 in the 1X2 betting.

Last season’s corresponding fixture finished 1-1, available to back at 6.5 in the correct score market. These two sides have failed to provide more than two goals in the match in each of City’s last seven Premier League visits to the Emirates Stadium, so it may be worth backing Under 2.5 goals at 2.09.