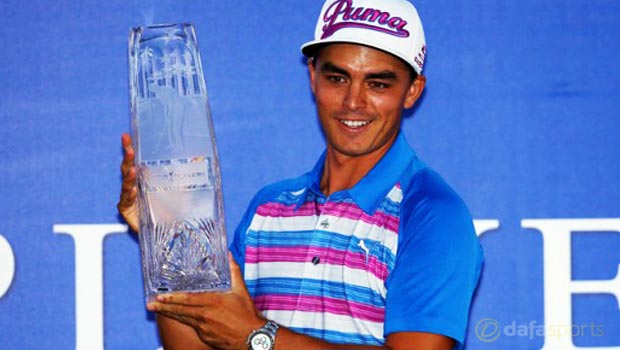 Rickie Fowler answered his critics in sensational fashion with a play-off victory at the Players Championship at Sawgrass on Sunday.

The American, along with Ian Poulter, had been voted as one of the most overrated players on the PGA Tour in an anonymous poll by his fellow professionals last week.

Fowler answered those critics with a record-breaking finish at Sawgrass that propelled him into a three-man play-off with Sergio Garcia and Kevin Kisner.

Having been plodding along during the final round, Fowler played the last four holes in just 11 shots as he produced an epic birdie-eagle-birdie-birdie finale.

That was enough to post a 12-under par total which looked like it would be enough for victory only for Garcia and Kisner to pick up shots on the closing holes and force their way into extra time.

The Spaniard was eliminated after three holes of the play-off and Fowler once more birdied the par-three 17th to seal his win.

Afterwards he was elated and he admitted it was nice to answer the criticism that has come his way.

“I was always looked at as only having one win on Tour,” Fowler said. “I always felt that I needed to put myself in position to win more often, and I did that last year [with top-5s in each major]. I wasn’t able to end up as the last guy standing.

“It feels good to be in that position.”

Having taken the criticism on the chin, the 26-year-old feels he has now answered the doubters.

“If there was any question,” said Fowler, “I think this right here answers anything you need to know.”