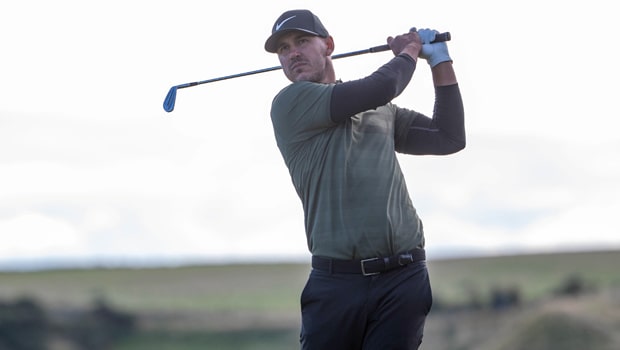 Brooks Koepka continued his love-affair with golf’s majors as he shot a faultless course-record 63 to lead the USPGA Championship on seven-under par after round one.

While suggesting it was amongst the best 18 holes of his career, the American knows there will be no room for complacency in New York. “That was one of the best rounds I’ve played probably as a professional,” Koepka suggested after needing just 25 putts and leading the field in strokes gained: tee-to-green.

“This golf course is brutal. It tests every asset of your game. You’ve got to drive the ball straight. It’s long, so you’ve got to hit it far and really position yourself with some of these shots in. You can’t take a shot off, and that’s what I love.”

Kiwi Lee made four birdies and one bogey on each nine at Bethpage to sign for a six-under par and second spot after round one. He will be out early round two, with a chance to reverse the roles by setting a clubhouse target for Koepka, who plays late on Friday.

Masters champion Tiger Woods (playing with Koepka) opened with a two-over par effort that was matched by Rory McIlroy and Francesco Molinari on a tough course, as the likes of Sergio Garcia, Patrick Reed and Henrik Stenson all laboured on +4 and have work to do to make the cut.

Koepka is now favourite at 2.50 to win the USPGA Championship, with world number one Johnson 11.00 and Fleetwood 13.00.