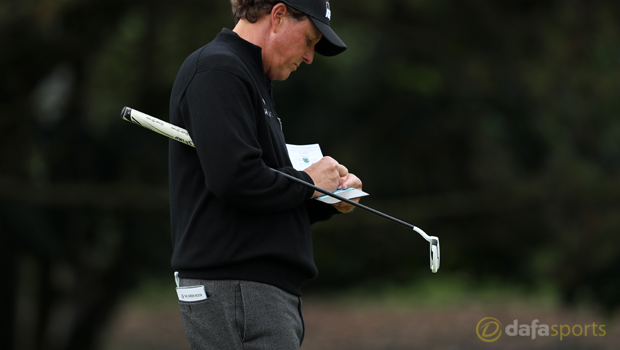 Five-time major winner Phil Mickelson admits the pressure is now off after just about making the US PGA Championship cut and he is now focused on playing some relaxed golf.

Mickelson came into the fourth and final major of the season in good form, having finished second at the Open after going toe-to-toe with Henrik Stenson in the last round at Royal Troon.

Many fancied the 46-year-old to make a serious challenge for a second US PGA crown this week and clinch one of the ‘big four’ tournaments for the first time since 2013.

However, the American has found life tough over the opening two days and he had to produce his very best golf on Friday just to ensure he stuck around for the weekend.

The 42-time PGA Tour winner started off with a triple-bogey after his drive sailed out of bounds but he managed to make four birdies and just the one bogey from there on, signing for a level-par 70.

Mickelson is currently sitting in a tie for 61st on one-over, 10 strokes off the lead, but he feels he can produce his best over the next two days due to the reduced expectation levels.

“After just making the cut I’m able to scale back my expectations for the week, enjoy the two days of the weekend and showcase just how well I have been playing,” he said.

“Even though it probably won’t be enough, it’s fun to be playing good golf.”

Mickelson is a massive 151.00 shot to win the competition and overhaul the current American mid-way leaders of Jimmy Walker and Robert Streb.

The latter hit a sensational seven-under-par 63 to move onto -9 for the tournament and he is priced at 12.00 to clinch a maiden major title.

Defending champion Jason Day is also in contention on -7, just two back, and he is the 3.30 favourite as things stand to retain the trophy.