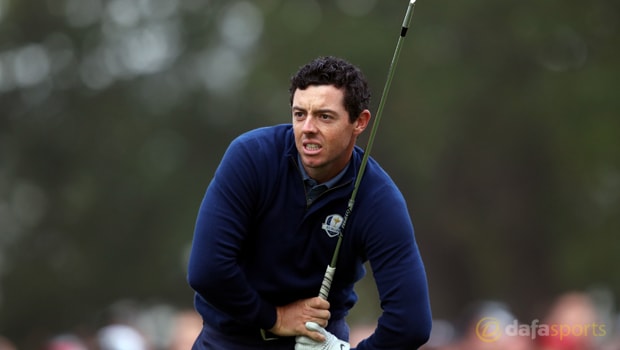 Padraig Harrington believes Rory McIlroy is the only man who can stop Dustin Johnson at next week’s Masters.

The world’s top players are currently tailoring their preparations for the first major of the season and having won on his last three starts, the world number one is the 6.50 favourite to claim the Green Jacket.

Having dispelled the doubts over his temperament under pressure by winning last year’s US Open, Johnson looks like he could be extremely tough to beat.

The Masters is the only major to currently be absent from McIlroy’s trophy haul and he has finished in the top 10 at Augusta in each of the last three years.

His issues on the greens have led to him being written off in some quarters but Harrington believes the 8.00 joint second favourite alongside Jordan Spieth, has the game to push the South Carolinian.

Although the three-time major winner admits the tournament could be Johnson’s to lose, he believes that McIlroy may still get the better of him if he manages to stay consistent throughout the week.

“With the way DJ is playing, Rory is going to be under pressure to bring his ‘A’ game and that’s tough enough,” he told Game On on 2FM.

“There is such a high standard at the top. “DJ doesn’t think very much, I don’t think DJ looks over his shoulder.

I don’t think he worries at all. DJ is the most likely one to play his game next week and if he does turn up and perform, he’ll be the winner.

“Rory is the only one capable of beating him at this very moment.”