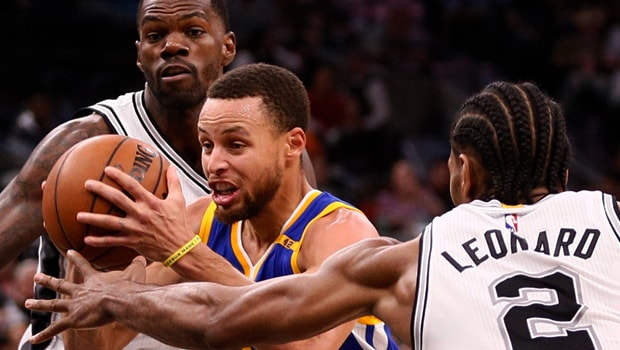 Gregg Popovich says the Golden State Warriors proved why they are the team to beat in defeating his San Antonio Spurs 110-98 on Wednesday.

The Warriors looked in trouble after falling 29-7 behind in the opening quarter but bounced back, with two-time MVP Steph Curry leading the way with a 29-point haul.

After forging an 84-77 lead heading into the fourth, they managed to hold the Spurs, who they could meet in the play-offs, at arm’s length.

Klay Thompson also pitched in with 23 points as his team extended their streak to nine straight victories.

Perhaps more importantly they landed a potentially crucial psychological blow on the home court of the franchise who currently sit behind them in the Western Conference.

There is still some way to go before the Championship is decided but the Warriors look primed to claim a second title in three years.

Wednesday’s performance perhaps showed just why they are the 1.75 favourites to win the Finals and they will be keen to continue their form when they welcome Houston to the Oracle Arena on Friday.

Popovich, who’s Spurs are 7.00 for the Championship, concedes his team were outclassed at times by the Warriors.

The experienced coach admits that Steve Kerr’s men will be tough to beat, especially with Curry and Thompson in such good form heading towards the post-season.

“They played great, they all played great,” Popovich said. “They just played better. Curry, Thompson — they all made shots. That’s why they’re the best team in the league.”