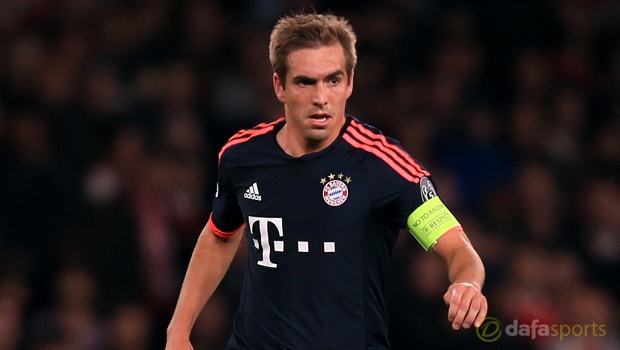 Philipp Lahm says it is unfair to blame Bayern Munich for the uncompetitive nature of the Bundesliga title race.

Despite some early problems following Carlo Ancelotti’s arrival in the summer, the Bavarians find themselves 13 points clear and look well on course for a fifth straight domestic crown.

Newly promoted RB Leipzig were their nearest challengers during the opening half of the campaign, with the likes of Schalke and Wolfsburg struggling to keep pace.

However, it is Borussia Dortmund who have been the biggest disappointment, with them again failing to mount a major challenge and they currently sit 16 points adrift.

Dortmund have been Bayern’s biggest rivals over the last couple of decades, winning the title in both 2010-11 and 2011-12 under Jurgen Klopp.

Lahm is due to retire at the end of the campaign and with the Bundesliga all but wrapped up, would love to go out with a second Champions League crown, a feat his side are 4.00 to achieve with Barcelona the 3.75 favourites.

Although his club have at times hindered their rivals by buying their best players, the 33-year-old says it is unfair to blame them for the current situation.

He told Stern: “Borussia Dortmund are an unbelievably talented team who could have made the Bundesliga title race a lot closer.

Although you have to say the rest of the Bundesliga lacks quality. “I don’t think Bayern Munich alone is responsible for how good we are doing.

If we are 13 points clear after 25 games, it means that other well-positioned clubs like Schalke or Wolfsburg have not been set up to win consistently.

“The financial situation in the league wasn’t that different in the years we finished second and fourth.”