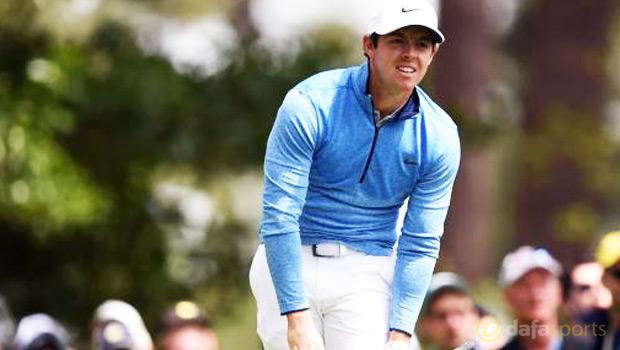 The reigning champion handled the blustery conditions perfectly throughout the majority of his round, while McIlroy dropped off the pace.

Spieth had a four-shot lead at one point but bogeyed the 17th, before he then posted a double bogey on the last to finish with a 73.

McIlroy, priced at 19.00 to win the Masters, will start Sunday’s round on two over after failing to post a single birdie for the first time in 81 major championship rounds.

He carded a round of 77 but is still adamant that he can become only the sixth man to secure a career Grand Slam when he tees off alongside American Daniel Berger.

“I think it’s winnable from here. If Jordan hadn’t had that finish then I would probably say no,” he told BBC Sport.

“But the guys on two and three over like myself feel we have a chance now. I just have to make sure that I get off to a fast start, put some red numbers on the board and make a bit of noise to put a bit of pressure on the guys playing behind me.

“I’m only five back and I can’t believe I am standing here saying that because I was eight behind standing on the 17th tee. I need to regroup and stay positive and go out and attack.”

Smylie Kaufman is Spieth’s closest challenger and is just one behind on two-under. Bernhard Langer rolled back the years to sit on one-under alongside Hideki Matsuyama.

Jason Day, Dustin Johnson and Danny Willett are also within striking distance on even par ahead of the final round.