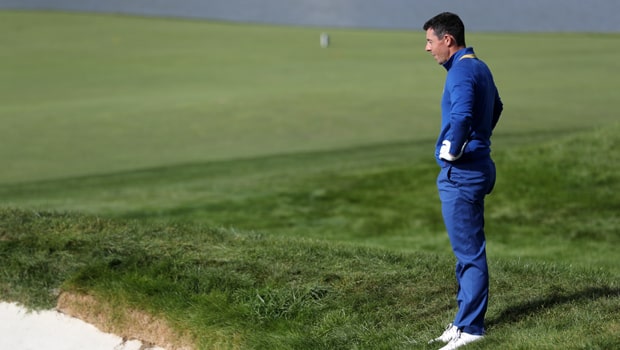 World number three Rory McIlroy made a disappointing start to his 2019 Masters challenge as a below-par short game left him seven shots off the pace on day one at Augusta National.

Playing some of his best golf for years, McIlroy started off as the pre-tournament favourite and there was genuine belief among the spectators that this could be his time to become just the sixth player to achieve the Grand Slam.

However, the 2019 Players Championship winner never seemed to settle in what looked like beautiful scoring conditions in Georgia and numerous errors around the greens proved to be costly on Thursday.

The Northern Irishman made five birdies during his opening 18 holes but six bogeys, with two of those coming at the 17th and 18th, resulted in a disappointing one-over-par 73 to begin his challenge for the coveted Green Jacket. Reflecting on his performance, McIlroy said, as quoted by Sky Sports: “It was okay.

The conditions weren’t that difficult. I mean I felt the course was there. It’s soft. There’s not much wind.

“I made five birdies, that wasn’t the problem. I just made too many mistakes and that was the problem. And I’m making mistakes from pretty simple positions, just off the side of the green, 17 and 18 being prime examples of that.”

American Brooks Koepka, who missed the Masters last year because of a wrist injury, and compatriot Bryson DeChambeau ended Thursday as the joint first-round leaders after they signed for superb six-under-par rounds of 66.

US star Phil Mickelson is in sole possession of third on -5, one shot off the pace, and he is priced at 15.00 for the tournament as he aims to become the oldest player at 48 years 9 months to win a major.

Englishman Ian Poulter and American Dustin Johnson are a further stroke back on -4 and the duo are 23.00 and 7.00 respectively to clinch the Green Jacket.