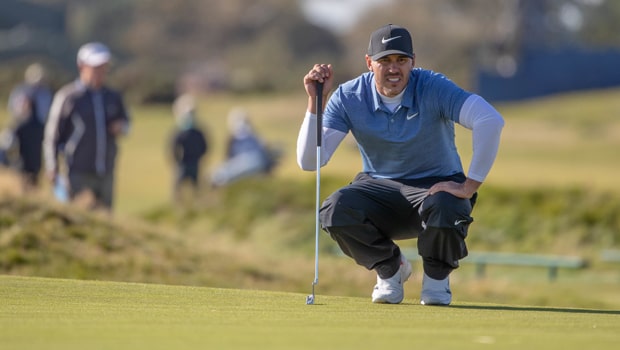 Brooks Koepka fired a first-round 66 to share the lead at The Masters before taking aiming at his critics.

The American, seeking to land his fourth major championship in under two years, caught fire with a back-nine of 31, five-under par, to share the lead with compatriot Bryson DeChambeau at Augusta National.

They lead by one from Phil Mickelson, the left-hander making a fine start to his bid for a fourth Green Jacket and the chance to become the oldest Masters winner in history as his 49th birthday approaches this summer.

Ian Poulter and Dustin Johnson share fourth spot, while former winner Adam Scott and Jon Rahm are amongst those on three-under par.

A restricted diet caused Koepka to lose more than 20 pounds recently as he prepared himself for a high-profile photo-shoot, something that drew plenty of criticism from sections of the golf media.

The American, a two-time US Open winner, took a swipe at those critics – some of whom had previously suggested he was guilty of too much gym work.

“I lift too many weights, and I’m too big to play golf. And then when I lose weight, I’m too small,” Koepka said.

“I don’t know what to say. I’m too big and I’m too small.” Then he looked at a scoreboard inside the interview room: “Obviously it seems to work.”

Koepka’s approach to major championship golf has reaped huge rewards since the summer of 2017 and he concedes he’s a different person in this unique environment that comes around just four times per year.

He felt that was evident when he three-putted the par-five eighth hole for par, before making five birdies in six holes from the 10th onwards.

“I’m super-aggressive at a normal event and that kind of backfires sometimes,” Koepka added.

“In a normal event that three-putt for par on eight really would have driven me nuts. I would have been sitting there for probably five minutes trying to figure out what I did wrong, but I just let things go a lot more easily in a major.”