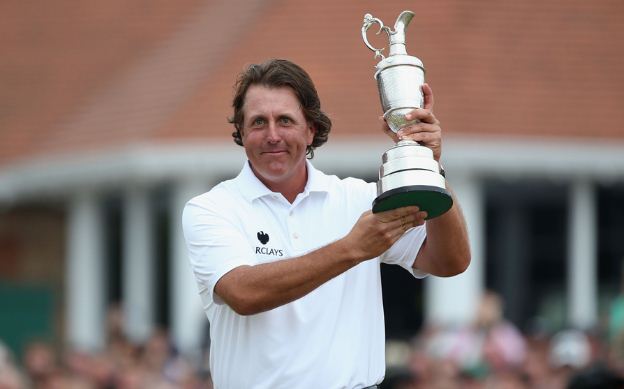 Phil Mickelson described his Open Championship victory at Muirfield as ‘greatest of his career’ as he came from behind to lift the famous Claret Jug.

The American started the day five shots behind leader and home favourite Lee Westwood, and with so many players in between, including Tiger Woods, a Mickelson victory looked unlikely.

However, the popular 43-year-old shot an impressive five-under-par 66 in the final round to make his way through a crowded leaderboard to take the win.

The victory was even more remarkable given the fact Mickelson suffered one of his career lows just six weeks ago when he squandered the chance to win the US Open.

All that was forgotten as he finished three-under-par, three shots ahead of Henrik Stenson, with Westwood, Ian Poulter and Adam Scott a further shot back.

“This is just a day and a moment that I will cherish forever,” Mickelson revealed. “This is a really special time, and as fulfilling a career accomplishment as I could ever imagine.

“I’m playing some of the best golf of my career. It’s the best I’ve ever putted. Today will be one of the most memorable rounds of golf I’ve ever played.

“It’s probably the greatest and most difficult win of my career. It is great to be part of any Open Championship and to win at Muirfield feels amazing.”

Mickelson is now three-quarters of the way there as he looks to complete an historic Grand Slam and will now be fully focused on putting an end to his US Open hoodoo.