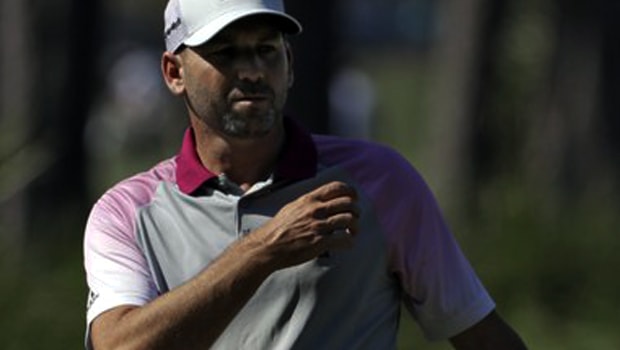 Masters champion Sergio Garcia admits he has been taken aback by the support and good feeling shown to him by his fellow professionals since last month’s emotional win at Augusta National.

The Spaniard, 37, finally ended his quest to win a major championship when he overcame England’s Justin Rose in a typically enthralling Sunday afternoon at the Masters.

Garcia led early on before Rose overhauled him and an errant drive on the par-five 13th looked to have done for the likeable Garcia.

A stunning eagle on the 15th brought him level with Rose and despite Garcia missing a chance to win on the 72nd hole, a birdie at the first play-off hole secured victory and unleashed a tidal wave of emotion for a player with 33 worldwide wins under his belt.

Garcia was inundated with good wishes and, as he prepares to return to competitive action for the first time at The Players Championship in Sawgrass this week, he says the love shown by his peers means the world to him.

“So many great things that have happened since Sunday at Augusta,” he said.

“You know, the support from fans and supporters and everyone around the world has been amazing.

“But for me, what has meant the most, it’s to see the reaction from the players.

They’ve been so happy for me to get my first major and win the Masters. “That, to me, it shows me a lot.

It shows me how much my fellow players respect me and care about me. It’s something that you can’t really fake, so that’s awesome.”

The ‘fifth major’ at Sawgrass is one where Garcia has done well in the past, winning The Players in 2008 and losing in a play-off two years ago.

Returning to a course where he has excelled in the past, Garcia is eager to try and harness his Augusta experience to fuel more success.

He added: “It’s in amazing shape, probably the best shape since they first redid it. The greens are firm. They’re rolling very, very beautifully.

“I’m excited to put myself in with a chance again and see if I can use some of those things that helped me win at Augusta.”

Garcia is 17.00 to win The Players Championship while Augusta runner-up Rose is 26.00.