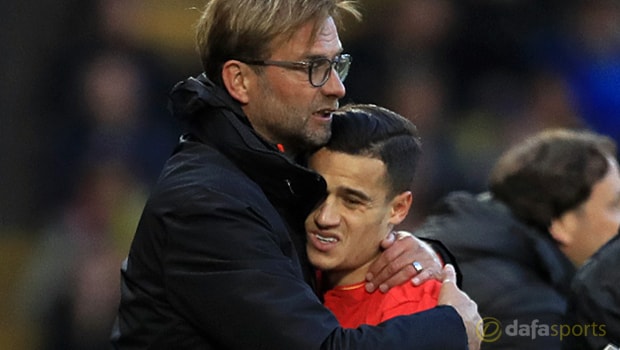 The Brazilian signed a new five-year deal with the Anfield outfit in January, but it has not stopped speculation linking him with a big-money move to Barcelona.

According to Klopp, the Liverpool owners have assured him that Coutinho, or anyone else in the squad, would only be allowed to leave the club on his say-so.

For that reason, the German is not getting too worked up by speculation over Coutinho’s future.

“There are absolutely no plans. What our owners say is there is the absolute opportunity not to sell anybody if we do not want to. That means we can bring in others players and it is a good situation,” said Klopp.

“We have a stable squad with a good basis. We want to bring a few in with fresh blood, but nobody will leave us without our say, so I am completely relaxed about this.”

On inking his new deal with Liverpool in January, the 24-year-old told the press his new long-term contract gave him the opportunity to establish himself as a legend of the Merseyside club.

Despite drawing at home to Southampton on Sunday, Liverpool remain on track to secure a top-for finish this season and earn themselves a shot at the Champions League.

With Arsenal having beaten both Manchester United and the Saints since however, their margin for error is now wiped out with just two games remaining.